Do the accounts of major companies add up when it comes to tax?

The Corporate Accountability Network has published a new report on the tax accounting of Tesco plc this morning. It's important to note that Tesco was picked because almost everyone knows of it. It also engaged with requests for data. It is the first of a series of companies to be investigated and not an isolated example. It is not in any way considered exceptional.

The work had a simple objective. As the report notes:

In this note the accounts of Tesco plc for 2021, 2020 and 2019 are reviewed to see if the entries in them with regard to corporation tax quite literally add up. We also checked to see if they gave a clear impression of the tax bills owing by the company in each of those years.

As a matter of fact, the accounts of all companies do add up with regard to tax: they have to or the double-entry within them would not be complete. The concern is that there is insufficient information disclosed within the accounts to show how this happens, with the potential that the full tax charge for a year might not be understood as a result.

There was insufficient disclosure in the accounts of Tesco plc for each of the years ended in 2019, 2020 and 2021 to understand how its accounts did add up. A reconciliation of its tax liabilities was only possible with the use of additional data supplied by the company.

The differences were not small. The figures highlighted in yellow in this reconciliation table for Tesco had to be supplied by the company as they were not available in the accounts: 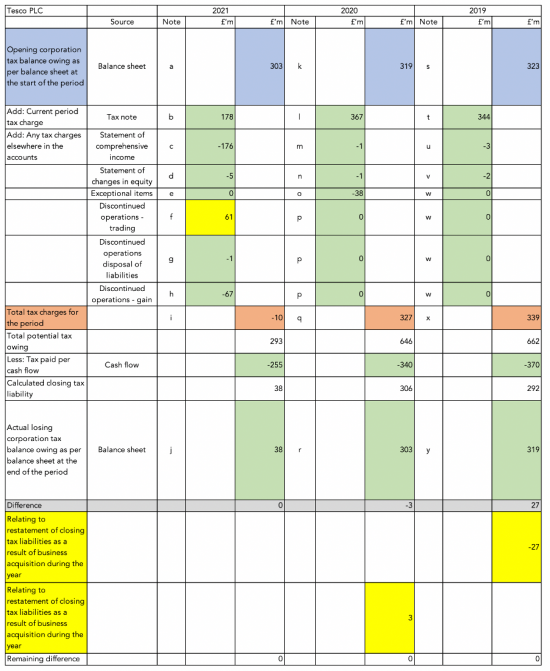 These notes help explain this reconciliation: 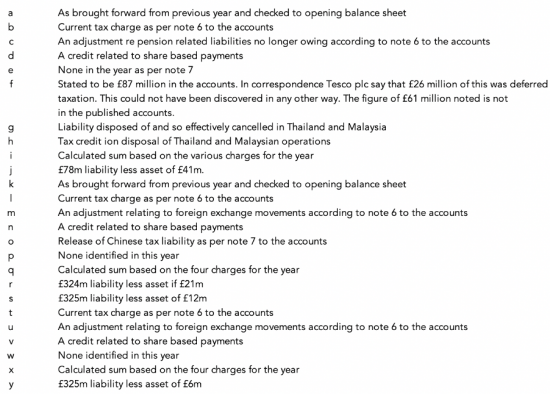 And the colour coding has to be explained:

Three figures had to be supplied and explained by Tesco plc to make the above figures balance:

I am grateful to Tesco plc for supplying this information when request was made. The required information could not have been ascertained in any other way.

As I explain in the Corporate Accountability Network report, the implications of the findings are important and universal: Tesco is just being used as an example here. In particular, what the report shows is that the headline figures for tax paid in a set of accounts can be quite misleading: 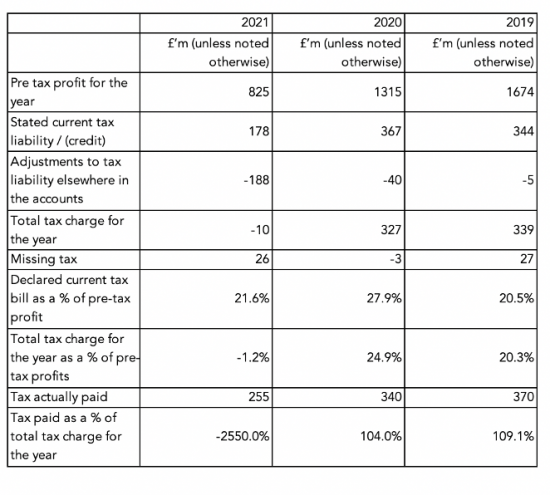 Almost all analysis of tax due by company is based on the figure for tax owing as reported in the notes to the income statement or profit and loss account. Very often those doing that analysis do not differentiate the figures for current and deferred tax: that in itself produces gross distortions with regard to real taxes owing since deferred tax is just an accounting entry and no such tax liabilities ever exist, as such. But worse, as this analysis shows, tax figures can and do readily pop up elsewhere in the accounts, and are very often significant. As this analysis shows, the income statement of Tesco for 2021 shows a tax liability owing at a rate of 21.6%. After adjustments are made for other figures in the accounts that changes to a refund owing of 1.2%. I think that material to the understanding of the accounts. I very strongly suspect that this matters.

The report suggests a range of parties to whom this might be of concern. I pick out three here. First there are shareholders:

This accounting test is a basic test of accounting credibility. Can the company make reliable statements to its members? If it cannot, what dependence should be placed upon the other statements included in the accounts? Should shareholders have to go to the lengths we have to establish the true position of the tax data within the accounts of the entity?

Then there are tax authorities:

The correct statement of tax liabilities is of significance to tax authorities because they are dependent upon the correct statement of accounts as the starting point for the estimation of tax liabilities owing by all limited liability entities. Although the items referred to in this note do not, in themselves, impact profit, they can have a consequence. In particular, if the estimation of minimum effective tax rates is to become commonplace with regard to multinational corporations then the correct statement of the tax due and paid by a company becomes a matter of some considerable significance and the lack of appropriate accounting data to prove that this is occurring will be of importance. As such ensuring that this disclosure is correct has now become a matter of some significance.

Correct statement about other entities not subject to minimum effective tax rate calculation is also important because much of the risk assessment process undertaken by tax authorities to decide those whose affairs should be audited is dependent upon statistical analysis, and the failure to appropriately state accounts could impact the quality of that work with a misallocation of scarce tax authority resources arising as a result.

And, of course, there is civil society:

The tax paid by large companies has become a matter of considerable concern to many organisations within civil society during the 21st century. Those organisations are dependent upon the provision of correct information from companies to ensure that any review that they undertake is reliable. In that case any test that proves the reliability of the information supplied is of considerable significance to civil society and any difference arising should be a matter of some concern to those engaged within it.

What can be done about this

As I note in the report, the obvious solution to the problem that we have identified is for Tesco plc to ensure that its accounts do reconcile in the way that we have noted that they should each year.

We suggest that a reconciliation demonstrating that this is the case be added to its tax note within its accounts in each year in the future.

We suggest that the same requirement be made of all companies, irrespective of size. Given the importance of tax within accounts we suggest that this basic test of credibility is an essential part of accounts in an era when tax is such a significant issue for all companies whatever accounting rules apply to them.

We also suggest that the total tax charge for the year be disclosed in the way that we have suggested possible in this note.

If tax paid differs to tax declared we also suggest that an explanation of the differences arising should be made.

To assist achievement of these goals we suggest that when a company is not required to publish a cash flow statement it should now include a statement of the amount of corporation tax paid in a year in its tax note to its accounts.

To reinforce this requirement, we suggest that the items that we note now be required by International Financial Reporting Standards; by UK generally accepted accounting principles and by UK company law.

This is a real issue I will explore in other blogs to follow and in more research now underway. Our companies have to be accountable for their tax liabilities and the data that we are getting from them is not good enough.

Important note: Tesco plc made this statement on this work which is also noted in the report:

The assertion that numbers in our audited accounts do not add up in relation to tax is incorrect. We take our tax reporting and tax compliance extremely seriously, and our corporate tax reporting adheres to all relevant accounting standards. The detailed tax disclosures in our consolidated accounts are in line with market practice and comply with the International Reporting Standard IAS12 in relation to tax. We have provided full explanations for each of the points raised with us, and we strongly disagree with the tone and conclusions of this report.