A global tax deal is very welcome for all its faults

The FT has reported this in the last couple of hours: 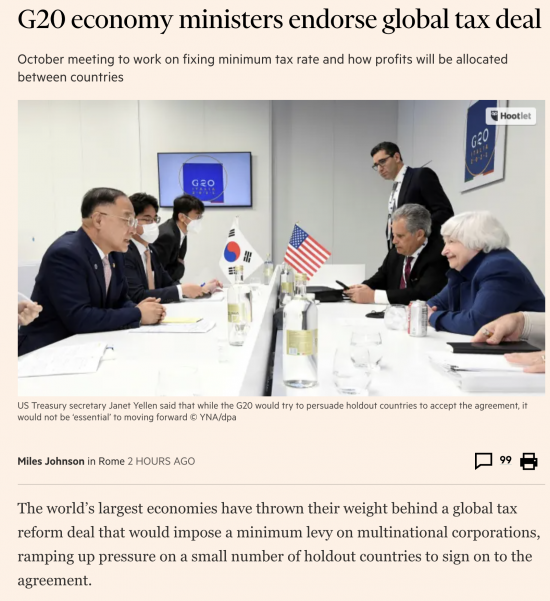 Thank goodness, and congratulations to all involved, say I.

I am well aware that the deal in question is less than ideal. It favours developed counties. It does not include enough companies. The tax rate is too low. The amounts of tax to be apportioned are too small. There are numerous reasons to be critical of it. I am. I hope for reform, still.

However, it’s easy to be critical. Let’s talk about the pluses. There are aspects to this deal that are extraordinary. First, 130 countries have signed up to this. That is already surprising. And the holdouts are all the usual culprits, and very largely rather obvious tax havens.

Second, the deal does something unprecedented: it creates the international legal precedent to deliver a global minimum tax rate. It does so without violating the rights of any state (although some will argue otherwise, but the way it is constructed permits my claim). And that global tax rate is likely to be effective.

Third, this deal is deeply threatening to tax havens: the zero rate taxes that they offer cease to have appeal for large corporations as a result of this. If that is not of note, what is?

Fourth, this will increase global corporate tax takes. That is good news.

Fifth, and of massive significance, the behavioural impact of all this is dramatic. It hits some very particular types of tax planning and the culture that has supported them very hard. It can be argued it could hit them harder. I agree, it could. But to suggest that this will not change the culture of tax planning would be entirely wrong. It will, and likely as much as it changed when in 2012 Margaret Hodge tore Google, Amazon and Starbucks to shreds in Parliament.

Finally, of course the deal is not good enough, but I have said the same of every OECD led deal to date. They have never delivered all I want. I put it on record now that the 2015 BEPS deal was really quite disappointing at the time, and I had worked very hard to deliver it and country-by-country reporting. I am sure I said so. But now we have another deal. And that is the way that it always works at the OECD. The next negotiation begins as soon as the ink is dry on the last one. And I am certain this is already the OECD’s plan: they will also be unhappy with this deal, of that I am sure. They too know it is not all that is needed. But within the constraints of the global political economy this is what could be achieved now. That is the fundamental reality of what has happened here. And as a realist, I welcome this deal. And I will welcome the next round of talks as they move to make further progress in the way that no one else is able to do.

I am also well aware that many in tax justice will not agree with me for saying that, though. But I think they are wrong. I may have more to say on that, soon.