The RNLI should not be accepting government assurance s on asylum seekers: it should be standing up for the rights of all who save life at sea

The blog post I wrote yesterday on the risk to the RNLI from the new Bill on asylum got a lot of attention on Twitter yesterday. The Home Office replied:

This doesn't apply to organisations such as HM Coastguard and RNLI helping those in distress at sea.

I replied to them as follows: 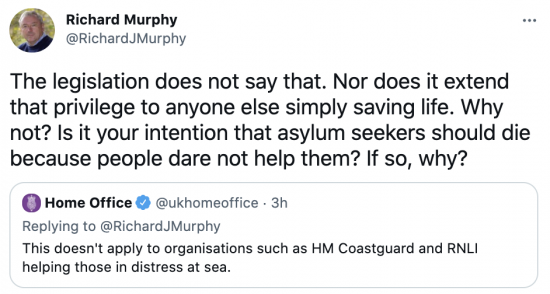 A Home Office Tweet would be no defence in court.

Then the RNLI replied, saying:

I said in reply to them before reading the link (this happening when I was waiting to go into Mark Cooney's funeral):

I then followed the links the RNLI posted which said this: 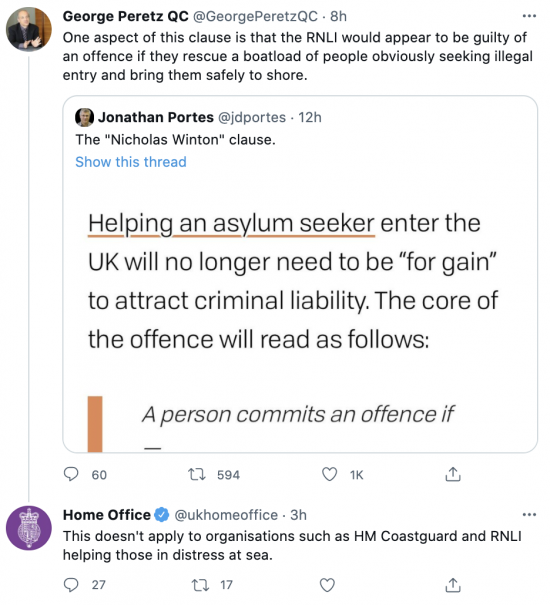 In other words, my concerns remain justified.

I think the RNLI would be naive to rely on the word of this government, and courts will not. This law has to change. I hope the RNLI puts appropriate effort into ensuring that happens.

I do that for more reason than wanting the RNLI to protect itself and its volunteers though. After all, they are not the only people to save lives at sea. As has been widely noted, the obligation to go to help those in peril is universal at sea; it is the duty of those who can assist to do so. Protecting the RNLI is not enough in that case. Anyone saving the life of an asylum seeker must be protected in that case.

The RNLI should take a lesson from Gareth Southgate. It should not only be protecting itself from the abuse of this government. It should take the knee. It should say all deserve protection at sea, including every asylum seeker who funds themselves in peril when running from exploitation in the hope of finding refuge.

As a life governor of the RNLI I made a commitment to it. I backed it up with action. Sure, that simply required me to make a reasonable donation. But there was a reason for doing that: I felt it a worthwhile cause. I now expect it to appreciate that if it is to be worthwhile it has to protect all who are at risk, and not just its staff and volunteers.

Will it? That is a question I will be asking it.

I hope others do so too.