Sajid Javid helped bring this country to its knees once. No doubt he will be seeking to do so again.Â 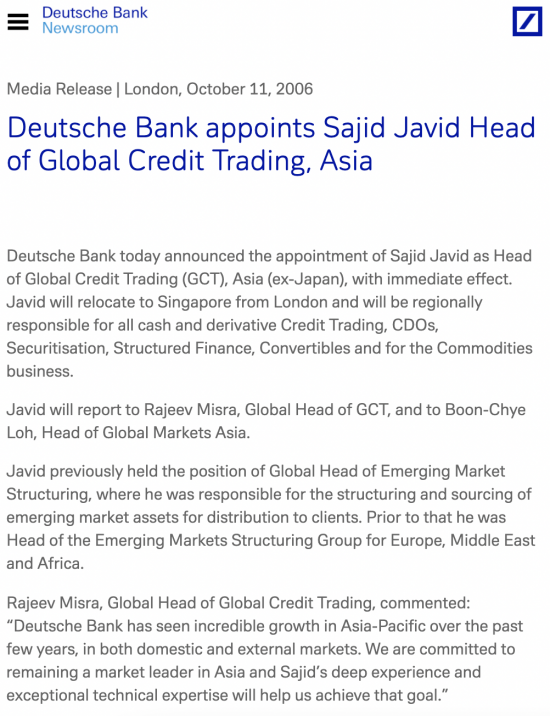 Sajid Javid is now the Health Secretary. As this press release shows, his prior experience was in trading the financial instruments that crashed the world economy in 2008.

And he was not a minor player. He was a major player at a major bank, worthy of having press releases issued about his career progression. In 2008 he helped bring down the world economy: no one else but bankers did that. Deutsche in London was right in the middle of that.

Now this Ayn Rand reading banker is making the decisions on whether or not the economy will reopen. And he says his I aim is to 'get back to normal'.

What? The normal where people whose only experience is in making a deal on a computer screen, the consequences of which they are utterly indifferent to, is what is defined as normal?

Or the world of Ayn Rand, which he has acknowledged is his own prescription for normal, where nothing but selfishness matters?

The one thing we can be sure of is that this will not be the world where patient interests have priority. That will not be his normal.

The NHS has been in trouble before.

We have all been in trouble as a result before.

But Sajid Javid is a straightforward threat to the well-being of the people of this country. He's helped bring it to its knees once. No doubt he will be seeking to do so again.

Hat tip: thanks to commentator Steve for drawing my attention to this.