Brexit delivers Ireland a trade surplus with the UK, for the first time ever

As The Independent has reported:

A collapse in British exports to the Irish Republic since Brexit has handed Dublin an extraordinary trade surplus with London, new figures show.

The Irish government says new trading red tape explains a â‚¬2 billion plunge in the value of goods sales — 47.6 per cent in the first quarter of this year, compared with the start of 2020.

The data published by the Irish government shows this: 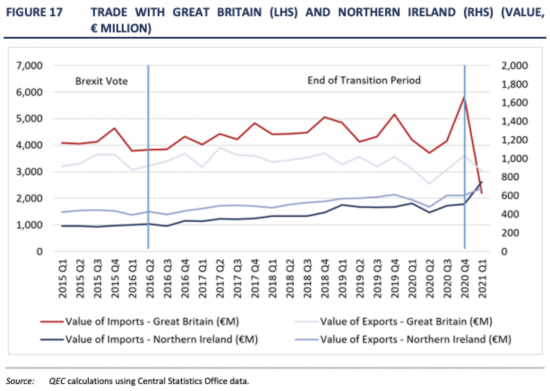 That is a staggering change in fortunes. The collapse of trade direct from the UK is extraordinary.

My attention was drawn to this article by Dr Tim Rideout. I think it worth sharing his comments on it:

UK Office for National Statistics stats don’t, I understand, separate out Ireland, so you probably won’t see this if you look at our data. Probably the majority of the Ireland to EU transit traffic that used to go via Holyhead and Fishguard is now going direct to France on one of the many multi-times per day services that have been running since January. There is bound, in due course, to be a big impact on Wales — Ireland ferry services and ports in due course as just one of the consequences.

I agree with Tim. The consequences of what is happening are staggering for British business, and those who depend on this trade.

I will ask, yet again, what are the benefits of Brexit supposed to be?