Nailing the truth twisters down 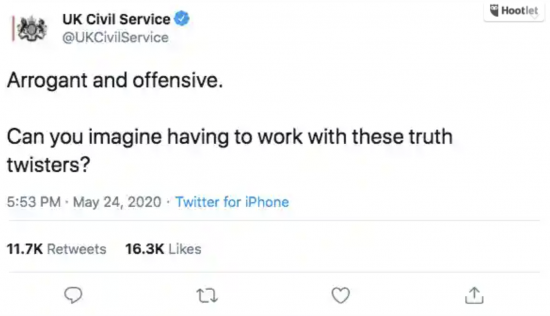 The post did not survive online for long, but the image has survived. And rightly so. The Tweet spoke of the truth, and it addressed itself to power.

It also so happens that today is the anniversary of the infamous Downing Street press conference during which Dominic Cumnmings defended his 'eye-testing' trip to Barnard Castle.

A year ago Cimmings seemingly had Westminster in the palm of his hand.

A year on he has gone, and so have almost all those who supported Johnson at that time, leaving him politically friendless at the centre of power.

But the truth twisting has not ended, except on Cuimmings part, where a sudden desire to tell the truth seems to be very apparent.

So why has Cummings changed heart? Could it be that he has sensed that someone will one day pay the price for having permitted so many people to die unnecessarily early and that he was prime candidate for scapegoat? Maybe he senses that now is the time to shift the blame to someone else, with Johnson his primary target?

I am finding it hard to form another view. Cummings realises just how recklessly irresponsible the government was a year ago, and how recklessly irresponsible it remains. And he is determined not to be the fall guy. In a very odd way we might have to think him for that. In saving his own skin he will, quite possibly, nail these truth twisters down. For the first time ever he might be doing a public service. But it does not exonerate him.