A significant part of my work over the last year that has not previously featured on this blog is featured in the latest newsletter of the Global Initiative for Financial Transparency (GIFT), for whom the work has been undertaken. As they say: 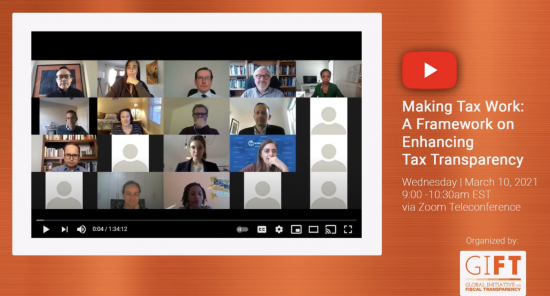 Through a virtual seminar participated in by tax experts from different international and country-level institutions, we presented the preliminary work of Professors Richard Murphy and Andrew Baker of the University of Sheffield on Making Tax Work: A framework for enhancing tax transparency (draft version).

During their presentation, the authors detailed a range of issues surrounding tax reporting and information standards, and propose a systematic appraisal of tax systems to enable and enhance revenue transparency. The document sets an analytical framework for assessing domestic tax transparency in countries around the world. The framework for enhancing tax transparency will assist the GIFT network in calling for a comprehensive discussion and in producing draft global principles on domestic tax transparency. The framework aims to guide governments in their efforts to disclose information on the revenue side of the fiscal equation, thereby facilitating civil society’s strong participation in informed public debates on tax reform.

The final version of the document, expected to be published in May 2021, will incorporate the main feedback provided by seminar participants, and will include the first version of the tax transparency principles in its conclusion. The GIFT network will then discuss the framework and principles at its next General Stewards Meeting in the summer of 2021.

The minutes of the said meeting can be downloaded here, while the video recording of the session can be streamed via this link.

Andrew and I began working on ideas around this issue in 2017, then at the invitation of Oxfam, and as a result developed academic work on tax spillover frameworks.

GIFT picked up on this. They are primarily funded by the IMF and World Bank, and work closely with a wide range of governments, mainly in south-east Asia and Latin America. The aim has been to expand their work on budget transparency into revenue transparency, and we are helping to create a framework to do this.

The work presented was a draft and now finalising it is one of my current high priority tasks, taking into consideration the enthusiastic and very useful comments from seminar particicipants, who seemed to see this as a very useful contribution to work in this field.

When I say I have a day job this is the sort of thing I am working on.

This work also formed the basis of the impact case study submitted by City, University of London based on my research to the REF (Research Excellence Framework).