The Bank of England has always been over-optimistic about the UK economy, and it is being dangerously so now

I promised myself that I would not write a blog post today. And then I read the speech Andy Haldane, Chief Economist at the Bank of England made yesterday before getting out of bed this morning, and my resolve failed.

I mentioned my opinion of Haldane in my comments on inflation, made yesterday. Haldane's comments yesterday were in a paper entitled 'Inflation: A Tiger by the Tail?' He obviously fancies himself as the new Tigger. It's an uncomfortable performance.

First, let's look at the official Bank of England projection: 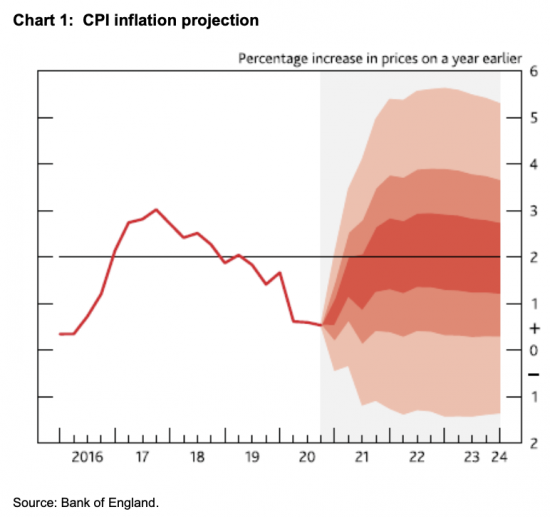 Remember the Bank is required to deliver 2% inflation, and what it says is that this is exactly what it will do, plus or minus, or as Danny Blanchflower reminded me yesterday 'all depending'.

There is an important caveat to this forecast. Haldane includes this chart in his speech: 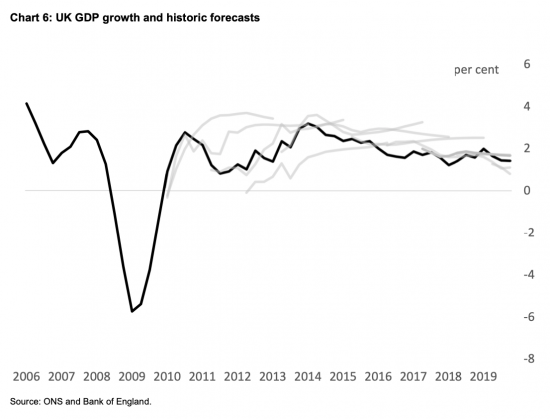 Every single growth official forecast after 2009 was overly optimistic, usually by some way, until Covid came along. The ability of the Bank, Treasury and OBR to believe that austerity, their supply-side reforms and QE would deliver a boost to growth has been astonishing and literally all of them failed. I think we need to read everything Haldane says now in that light. This is a person who has overseen the slowest recovery in 300 years, and is now sitting on the worst recession in 300 years.

History is also against his view. As he also notes, the trend in inflation is d0wnward: 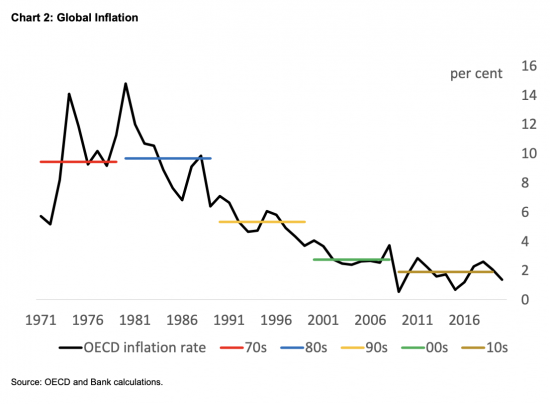 The trend in interest rates matches that, near enough: the two are, of course, related.

So why does Haldane have his innerspring coiled, Tigger like? He thinks it is the increase in the money supply, created by QE and government-backed lending that will deliver inflation. He notes:

So, there is a lot more money around, albeit money that is not spent. But, he thinks that is going to change. One reason for this is that he still thinks that banks are intermediaries (he use the term several times in the paper) despite the fact that the Bank of England shattered this myth in 2014. So, he thinks there will be more lending now because there are more deposits, having failed to note that the recent growth is entirely because of the supply of government guarantees, most of which are about to be withdrawn.

For another reason, he draws on Milton Friedman, who he notes described money as 'a temporary abode of purchasing power'. Haldane thinks temporary means 'for the short term now'. He is encouraged by the fact that almost all saving has been in cash.

And why? He notes that households have accumulated £150bn of savings during this crisis and businesses £100bn. I suspect he understates the sums in question unless the foreign sector has also been saving in the UK. But the important point is that he believes that theses sums are about to be spent. Or rather, he thinks households will spend, as he seems to have less confidence in a growth in investment.

His logic is bizarre. He recognises that 'savings are highly unevenly distributed across UK household' but then says 'the Covid crisis has resulted in stronger, not weaker, balance sheets, at least for the average household and company. This is likely to increase, not reduce, their willingness to take risk'. In other words, the animal spirits of most households are about to be let loose.

It was at this juncture that I realised I was reading the work of someone who I think I can appropriately describe as a fool. The reason is that averages are not the basis for forecasting, for reasons he has noted, to which I refer. It is, of course, true that there are some households and businesses with considerably stronger balance sheets now than they had before this crisis. Those in this position are considerably better off. But the majority, by some way, are not.

Over 80% of businesses are likely to have taken on borrowing during this crisis. They are not better off. They have a mountain of debt to service.

And there are millions of households in the UK now facing debt crises. The sums that they owe might, individually, be much lower than the average gains for the best off households. But here comes the point where Haldane proves himself the fool: he averages across the population as a whole and so says there is a wall of money to be spent.

As I have suggested before now, no doubt amongst his rich mates this is true. But in general, a small treat or two apart (and of course they will happen) that is not true. Averages in a situation like this give no hint as to likely behaviour. Distribution does.

And the distribution of saving is heavily skewed, with most being amongst those with the lowest marginal propensity to consume because they are already wealthy and can consume all they want anyway.

I quietly despair at the poverty of this thinking.

I also despaired when noting that Haldane does not realise that banks do not intermediate.

I also despaired that his chosen references are to Friedman and Hayek.

But most of all, I despaired because markets are being influenced by this complete nonsense. They actually believe that he knows what he is talking about. But, of course, those in financial markets share his current life experience.

In the real world people will not take risk. There are three reasons.

First, R is going to increase rapidly after school reopening, I suspect. The chance that lockdown will end in June is remote, in my opinion.

Second, even if it does the end of furlough is going to be bad news for many. Unemployment is going to increase.

Third, for those businesses with poor balance sheets reopening is going to be tough. The economy is not in for a smooth upward ride.

Risk will abound, then. And so people will not be spending.

Of course, at ‘all depends’ but I am not an optimist, and the evidence stacks heavily in my favour.

The chance of inflation is low. But so too is the chance of economic good times. And Haldane has always called that wrong.

The worry is that Sunak will base policy on this nonsense. Then this becomes dangerous.