The Guardian has reported that:

Labour MPs are being asked by the party’s high command not to focus on problems caused by Brexit when asking questions in parliament, dealing with the media, or posting on social media, according to sources in the parliamentary party.

After a week in which Labour leader Keir Starmer delivered a major speech on how the country should rebuild the economy and reduce inequality without once mentioning Brexit, relations with the EU or the severe problems that have confronted many UK exporters since 1 January, senior party figures reacted with astonishment.

I am not surprised that they were astonished. This data combines the results on 106 opinion polls on Brexit since 2017: 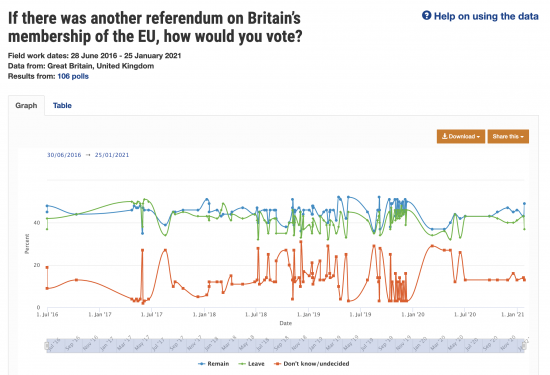 The reasonable conclusion from that data is that at least half the UK still has considerable doubt about the wisdom of leaving the EU. I am amongst their number.

And what Labour is doing, in a first past the post electoral system in which the government is determinedly pro-Brexit, is to refuse to represent those people. The result is that, with the best will in the world towards the smaller parties in England and Wales, there is no real prospect of political representation for around half the population in those countries at present.

In Scotland, of course, it is different. The reason why SNP support continues despite its in-fighting must in part be because there is fundamental alignment between that party and many in Scotland on the key issue of the day, to which alignment on Covid can be added.

In England and Wales there is no such alignment at all. Instead, we have the key opposition party deliberately turning its back on half the electorate in a deliberate move designed to ensure that they only compete on the government’s laid down terms, which guarantees that  they will lose. They can never out-Brexit the madness of the ERG on the right wing of the Conservative Party. This, then, is a policy with guaranteed failure built in, and yet Labour pursues it.

I would be annoyed enough if I was a Labour member. I am more annoyed because I am not. Not only is Labour refusing to represent half of England and Wales, and more than that in Scotland, but because of its intense tribalism that denies us any chance of political representation that might reflect our views in a proportional representation system it is also denying us the chance to be represented by parties that do reflect our views.

The result is obvious. It is that Labour guarantees perpetual Tory rule whilst undermining any chance of democracy in this country.

And please don’t say Corbyn would have been better on this. He clearly was not.

We are left in a desperate position where Labour joins with the Tories in destroying the proper functioning of democracy  in this country by simply  refusing people choice.

I loathe what the Tories are doing, but Labour has to be called out for facilitating it. And that’s both sad, and as annoying.