The Bank of England has to be subject to political accountability. For it to be otherwise is a threat to the very core of our democratic process.

Andrew Bailey delivered one of his usual speeches that included little link to reality on Friday. He began by saying:

It is fast approaching twenty five years since the UK decisively changed its monetary policy framework and embraced the idea of an independent central bank with a mandate to maintain price stability in the form of an inflation target. Now, 25 years may not seem long in the broad sweep of history, but the history of UK monetary regimes points to a quarter of a century representing a relatively long-established one. Long may it last, because it has been successful, and it has delivered the much desired price stability.

As openers go few are as bad as this.

First, the Bank of England failed to anticipate, and even facilitated, the 2008 financial crisis.

Then, second, it supported austerity.

And third, it has not achieved its inflation targets for a long time.

Fourth, its only policy measure of consequence, which is the chance to change interest rates , has been inoperative for a decade.

And fifth, QE, which is its alternative measure, has lead to massive and fast-growing inequality whilst hollowing out UK business as it seeks to pay returns to shareholders rather than invest for our future.

So, that's Bailey's first claim debunked. But it gets worse. He then claimed:

I sometimes hear that the Bank has flouted the rules and thereby damaged its independence, by purchasing government debt and lowering the government’s cost of borrowing. .... But I’m sorry to have to be blunt, I’m afraid these arguments are entirely without merit. In a world where the Government has to manage the task of spreading the cost of the pandemic which would otherwise fall on individuals at great cost to them, and the central bank is acting counter-cyclically to support demand in the economy consistent with its inflation target, it is hardly surprising, and indeed consistent, that the Government should be able to benefit from those financing conditions. ...

The consistency of the response of monetary and fiscal policy is something that the IMF has emphasised and recognised in its assessment of UK policy. But that does not mean independence has been abandoned. The interventions we have made are effective because the Bank is independent, and because we will reverse these actions when conditions require that. A fallacy of so-called Modern Monetary Theory is that it believes monetary policy can be used without the credibility of independence and thus without the assurance that price stability will be maintained.

There is no one who I think believes Bailey on this. However many times he says that the Bank is not funding the government no one believes him. And there is a good reason for that. It glaringly obviously is.

This is the history of QE from the Bank of England website (from which most QE content seems to have been stripped of late, about which fact I have raised query with them): 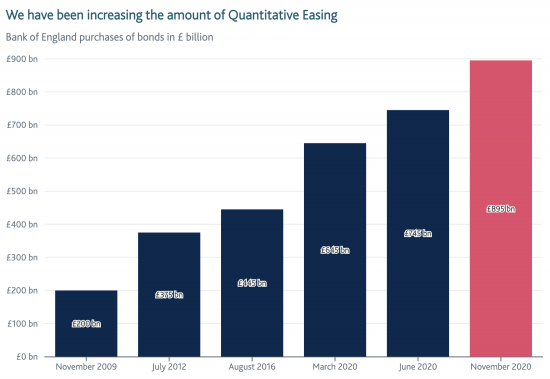 It is just possible that injections of cash in November 2009, August 2016 and March 2020 were justified to prevent bank crashes. But if so, they could have been reversed quickly in that case once the crisis was over. But none were. In fact, no QE has ever been reversed in the UK. So Bank stability was not the reason for this policy.

Nor is there much credibility to the claim that QE has been used to support the inflation target. This data is from the ONS: 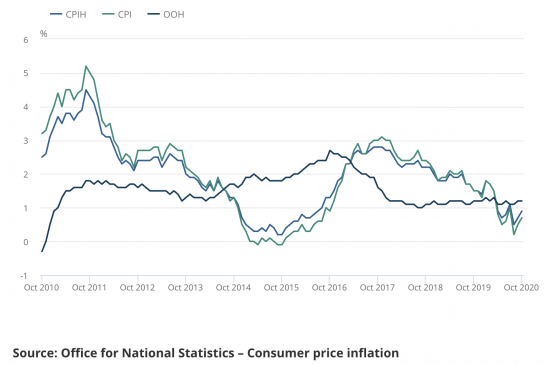 In 2012 when there was a batch of QE inflation was above target and stabilising. If QE was really intended to drive up inflation there would have been bouts between 2014 and earlier in 2016 than happened. But mysteriously UK government current deficits were falling then, and so there was no obvious need in the view of the Bank: 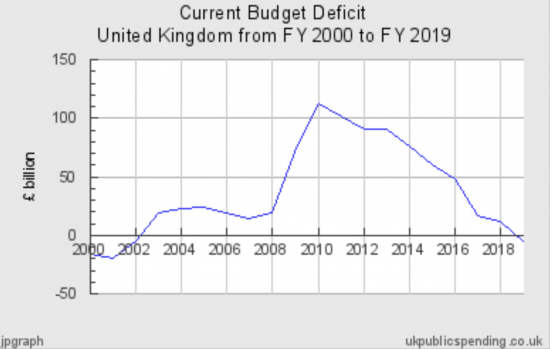 And has there been a need for £450 billion this year, barring a likely government deficit of maybe similar amount? It's not clear, not for the reasons Bailey says.

Bailey went on to say:

Of course, the real test of this may come when we reach the point at which policy needs to be tightened. Actions will speak louder than words. But the great value of central bank independence – and the reason why it is rightly regarded so highly – is because it is a regime that provides the most powerful set of incentives possible, to do the right thing when that time does come. We are individually accountable and collectively responsible to Parliament for acting, without fear and favour, to hit the inflation target.

So, whatever the social consequences, the Bank will, according to Bailey, increase rates if it so wishes. Which is simply not true, of course. The claim that the Bank if independent is not true.

The Bank has to do what the government demands or its discretion can be suspended, as the Bank of England Act 1998 makes clear (section 18 as I recall, but it may be 19).

And the Exchequer and Audit Departments Act of 1866 gives the Bank no choice but make payment as the government directs, whenever the government so wishes.

The truth is Bailey has as much discretion as a junior civil service clerk, but is given the option to pretend otherwise, which he overuses in speeches like this, blowing his credibility as a result.

Bailey would be wise to take note of MMT. It is not a theory on this issue. It describes what is actually happening, which I have evidenced to be true.

He would also be wise to note that without policy based in democracy - which he is seeking to deny exists - we have ceased to be the country he might claim to serve. The Bank of England has to be subject to political accountability. For it to be otherwise is a threat to the very core of our democratic process. In that case, Bailey's posturing is not just obviously wrong, it's also dangerous. I hope his pride does not come before a fall.