Tax haven UK is on its way

The Brexit deal's arrangements with regard to tax are surprisingly limited, unless they relate to VAT  and imports and exports. As far as I can see they are this: 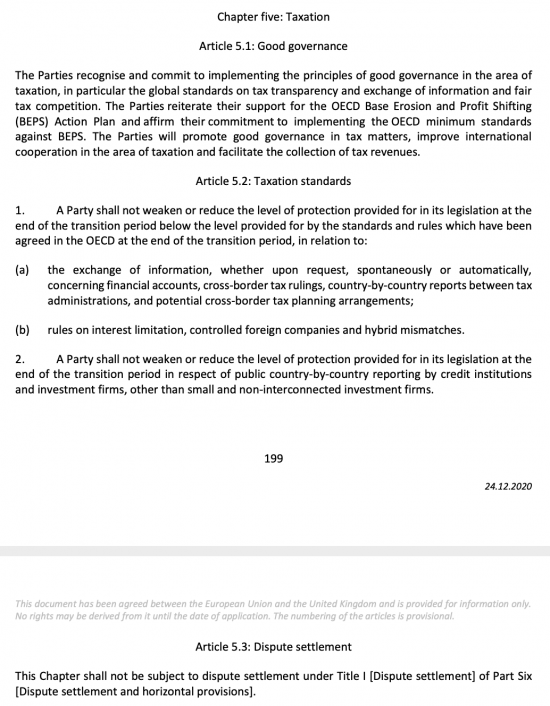 That really is lowest common denominator stuff (although I can't help by be amused and paled by the references to country-by-country reporting, for obvious reasons).

The UK is already committed (in its own half-hearted manner) to the OECD's Base Erosion and Profits Shifting programme. And automatic information exchange is now normal. There is nothing in these commitments that goes beyond the obligations of OECD membership.

As I noted on Christmas Ece, the notable absence is any reference to the EU Code of Conduct on Business Taxation. This was created in 1997, and was heavily UK influenced for a long time. The EU's summary is that it effectively seeks to ban arrangements that are potentially harmful, including:

I have written on this many times in the past and most especially with regard to its application to the UK's Crown Dependencies, and to a lesser extent to the Overseas Territories. This was because I was engaged by some members of the States of Jersey to write a report on whether Jersey would comply with the Code in 2005 and forecast that it would not. In 2010 I was proved right and it had to change its laws, as did the Isle of Man and Guernsey. What they had proposed included ring-fences of classic tax haven type that clearly contravened the Code.

Now it would seem that these ring fences are permitted again, both within the UK's tax havens and within the UK itself. No wonder the government is making such a song and dance about the fact that so-called 'freeports' will be a major part of the post-Brexit UK economic landscape. The aim is to introduced tax havens on the UK mainland now. I have discussed the dangers, here.  I now suspect that these will be much more abusive than the government implied in 2020.

It would seem that tax haven UK is on its way. Lowest common denominator abuse is the stock in trade of this government at a great many levels. It seems that dredging the buck and seeking a return to the old days of tax havens is going to be one of their chosen weapons of aggression. I sincerely hope the EU are ready to retaliate. Blacklisting will not be enough. Tax withholding should be their preferred weapon of choice, making sure financial flows to the UK are taxed before arriving here. Only this might be effective.

This could get very ugly.