The war of hate has begun

I admit that I do not spend a great deal of time looking at the musing of ex-Sun editor Kelvin MacKenzie on Twitter. This, however, was drawn to my attention:

The war of Brexit hate is growing. Apparently, they are now Nazis. I take personal offence at that. My grandfather - who was Irish - died as a result of his service in the Royal Navy in World War II. He was 45 when he died. His was a service of choice. How dare he offer such ungrounded abuse?

And maybe worse, this seems to me to incite racial tension. A stereotypical racist attack has been raised on the basis of a falsehood. I have reported the tweet to Twitter. I will be watching carefully to see what action they take.

And if there is any doubt that he is trying to incite racial tension, I add these as evidence: 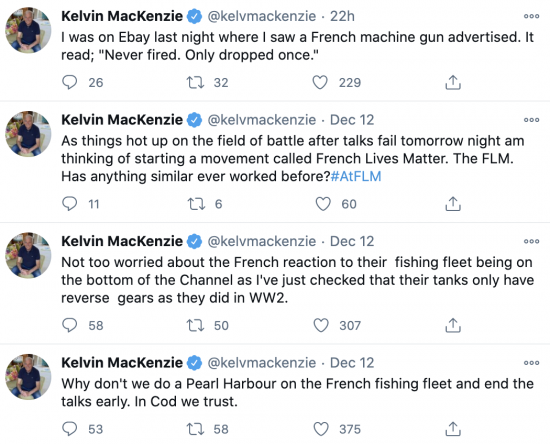 These are disgusting, and again all too obviously intended to incite racial tension. As is this:

I am sickened by all these tweets, and no doubt they are far from the most offensive on Twitter.

What are we coming to?