The Governor of the Bank of England really does need to tell the truth about QE, even if that means he must find out what it is

I watched some of the Treasury Committee hearing this afternoon. A Bank of England team were being questioned on many issues, including MMT. Steve Baker MP was the stooge (the correct term on this occasion) on MMT. It was at 16.48 here.

I was infuriated by all the usual nonsense. Andy Haldane's zinger was MMT is not modern, not monetary and not theory. Oh dear, not enough Greek symbols to keep him happy in other words. And as for his claim that it was a 'one-off trick' that was unrepeatable, who knows what he was talking about? I am sure he did not.

But the Governor, Andrew Bailey was much worse. I tweeted twice in response. The first tweet was provoked by the claim that QE can only happen because the Bank of England is 'incredibly independent'. Actually, as I explained yesterday, absolutely everything about QE is wholly under the control of the Treasury.

The Bank cannot do QE without written permission from the Treasury. And the company that manages QE assets is wholly indemnified by the Treasury for its actions and so not considered for accounting purposes to be part of the Bank of England, which fact (for fact it is) motivated this tweet: 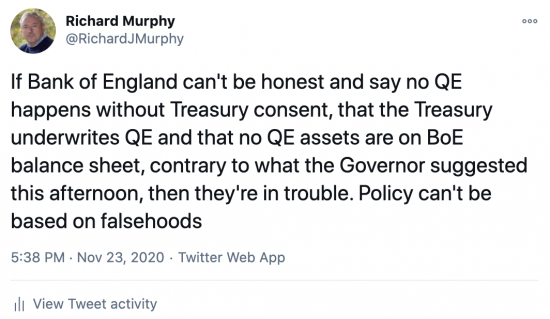 This was in response to claim by the Governor that if the gilts subject to QE were written off there would be a massive hole in the BoE balance sheet. There would not be. There would simply be money owing to the BoE from the Treasury, which is, of course, the case now, albeit via a convoluted route, because all that a gilt actually represents is a promise to pay by the Treasury.

I admit to having been shocked by the display. The arguments on MMT were incredibly weak. And the claims on QE were, in my opinion, false. I can't put it another way. I think they were wrong. And I don't expect the Governor of the Bank of England to either a) make false claims or b) make claims that are false but he is so unaware that he does not know it. A shocking performance in that case.