The Institute for Fiscal Studies has issued its Green Budget (i.e. its forecasts for what it sees the budget scenarios to be) for autumn 2020 even though no budget is now expected. I think it fair to say that some of what they say is unsurprising, most especially as the work is being done with Citi, the US bank that has extensive operations in London.

They forecast growth as follows: 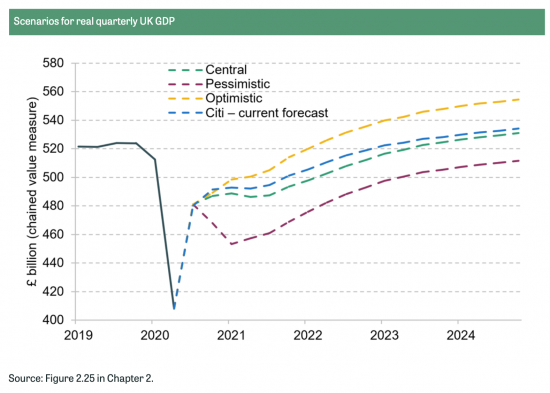 They make clear that this is impacted by Brexit: 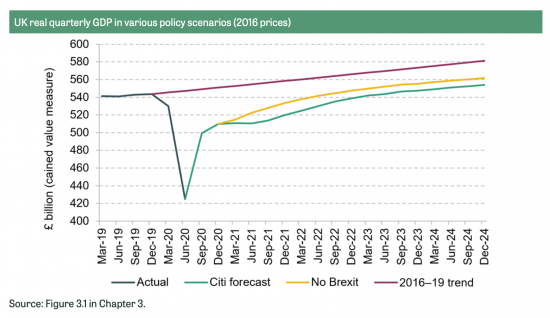 And then they show the impact on the government's balance sheet: 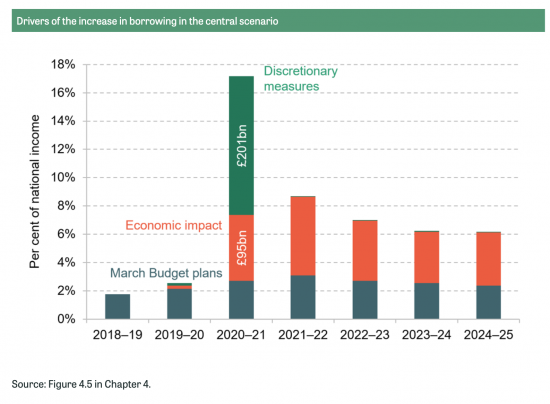 It is annoying that this last is stated in percentage terms, as is this chart: 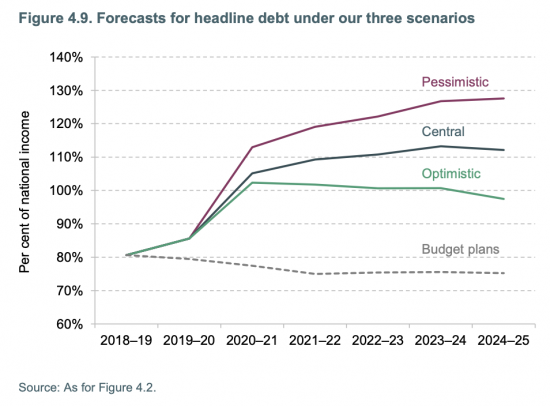 The implication of both is, however, that the government will have to undertake what the IFS thinks to be borrowing over the next five years, and at rates much higher than those forecast in March 2020.

As the report says:

The UK has traditionally shown itself to be a relatively flexible economy. This reputation is likely to be tested to the extreme over the coming years. We expect substantial restructuring of the UK economy in the years ahead as it responds to the new shape of demand from UK consumers in the wake of COVID-19 and the new shape of trading relationships in the wake of Brexit. Such restructuring implies a more protracted economic recovery and a substantial loss of economic capacity as some of the expertise and capital specific to now shrinking sectors becomes surplus to requirements.

In other words, expect turmoil, massive rates of corporate insolvency, major economic restructuring (the basis of which they do not seem to predict) and the need for significant state support.

In addition, we think COVID is likely to have hampered public and private preparations for the end of the Brexit transition period, compounding the near-term economic cost. We expect GDP growth in 2021 to be 2.1% lower than in the event the UK were to remain in the EU Single Market and Customs Union. In a normal year, this would be enough to push the economy into recession. Some of this growth is likely to be made up in 2022.

A third of the deficit will, in that case, be Brexit related, in their opinion. And it is their opinion that this must be compounded by moves towards austerity. As they say in their summary briefing:

Persistent policy support will be needed to help the economy through this transition. However, fiscal policy will also have to tread a fine line between supporting growth in the near term and charting a path to fiscal sustainability in the medium term. This is a significant challenge.

It is an obsession that permeates the report, that is paranoid about 'sound government finances', without appreciating that this is precisely what we now have. For example, they say:

This year’s deficit will reach a level never before seen in the UK, outside of the two world wars of the 20th century. But what matters much more for the long-run health of the public finances is how complete the economic recovery will be. With the cost of borrowing at a record low, additional spending now that helps to deliver a more complete recovery would almost certainly be worth doing. For now, the government should focus on designing and delivering such support. But, in the medium term, getting the public finances back on track will require decisive action from policymakers. The Chancellor should champion a general recognition that, once the economy has been restored to health, a fiscal tightening will follow.

I highlighted the last point, but it is repetitive, with foreign-owned debt being their excuse for this:

The economic response to COVID-19 has seen monetary and fiscal policy complement each other, as the Bank of England and the government both seek to support the economy. However, this complementarity is less assured in the medium term: upward pressure on inflation (and particularly inflation expectations) could lead to the Bank tightening monetary policy even if fiscal policy still needs to remain loose. The UK’s dependence on foreign credit remains a notable additional vulnerability. More fiscal support will likely be needed in the near term. But getting the public finances on a sustainable trajectory in the medium term is also now a key challenge.

And as if to make clear that obsession they focus heavily on the foreign ownership of UK government gilts, before noting what they claim is the resulting cost of this dependence:

The COVID-19 crisis has pushed up government borrowing substantially, meaning that the Debt Management Office (DMO) will need to sell a much larger value of gilts than normal. Our central scenario is for over £1.5 trillion to be raised through gilt issuance over the next five years, double the £760 billion forecast in the March 2020 Budget. There is considerable uncertainty around this amount.

This sum is not all new debt, of course: much is rolled over debt. And they add:

The expansion of the Bank of England’s programme of quantitative easing means it bought £236 billion of gilts between March and September 2020, almost exactly the same as the £227 billion of gilts issued by the DMO over the same period. As a result, private borrowing has not been crowded out by government borrowing. The financing cost of quantitative easing is Bank Rate, which is at record low levels, and has therefore further depressed government debt interest spending from already record lows as a share of receipts. However, the tilt towards Bank of England held debt means that the government’s debt interest bill will rise sharply if Bank Rate rises.

To this they add:

The expansion of the Bank of England programme of quantitative easing means that virtually all of this new debt has been bought by the Bank. The cost of financing this debt is the Bank Rate. While this remains historically low, it helps to hold down the government’s debt interest bill; however, debt interest spending will rise suddenly and sharply when the Bank Rate increases. Since government spending is now more closely tied to the Bank Rate, it will be even more important to ensure that the Bank of England continues to be — and be perceived as — independent and focused on its monetary policy mandate.

But they cannot, or do not, explain why this is the case. They say:

Quantitative easing reduces the effective maturity of government borrowing. This — combined with elevated issuance over the next five years — means that a 1 percentage point increase in all yields would now add £19 billion to debt interest spending in 2024—25, some 76% higher than the £11 billion forecast in March 2020.

So, for the sake of £8 billion, which is utterly immaterial in the context of this analysis, they want the whole of the economy to be run on the basis of the fact that there is austerity to come. The reasoning is not explained.

Nor is there a hint that there may be further quantitative easing to cover debt issues in the years to come, even though the chance that this will happen is extraordinarily high.

And there is no hint of the fact that since these issues are effectively made at base rate, and that the reserve balances in question are now likely to be in excess of £600 billion, and maybe more, the Bank of England has almost total control of short term rates as a result of this structure, as well as long term rates via QE. In other words, it is a strength and not a weakness.  a

They also give no hint as to why rates will be rising in the next few years, when there seems little chance of that around the world with Fed, ECB and Bank of Japan policy as it is, so why they think the UK will be so out of line is hard to imagine. Unless, that is, because an independent Bank of England might decide to increase them for the reason that the IFS suggests, which is that, as they put it, without explanation:

Rising yields accompanied by stronger growth would be welcome.

So why do they say this, and what's the reason for the obsession? I can only offer one explanation, and come back to the fact that this report was written with Citi, which is a City-based bank as far as the UK is concerned. And, of course, it wishes for an increase in yield: that's a way for it to make money.

This report has, then, to be read not as any form of objective review, bit simply as a manifesto for neoliberal policies that maintain the status quo in the interests of the banking community of the UK. The fall of the Institute for Fiscal Studies from any sort of credibility is just about complete. They are instead simply a cover for the wealthy to demand the policies that they desire. It would only take a 55 Tufton Street address for that to now be completely apparent.