We have no clue as to what is going to hit us economically as a result of a No Deal Brexit as yet, but whatever we assume it will probably be much worse than we can imagine

I believe these comments are coming from an informed source: 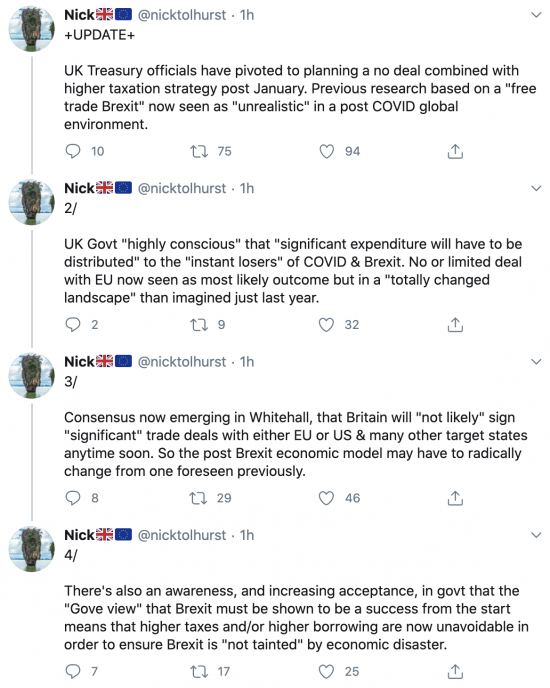 It now seems very likely that those assumptions are wrong. It now seems not only that a Brexit deal is very unlikely but that any trade deals are also unlikely as well, most especially with the USA, but also with many other countries as a result of the proposed UK approach to the EU on Northern Ireland.

Those forecasts from both the Bank and OBR also assume no upturn in Covid 19, and that upturn is now happening, with clear consequences now planned that will slow economic rec0very.

In those two circumstances, there is now no reason to think any of the existing forecasts are likely to represent anything like what will happen.

What would the reasonable assumptions be for new projections be in that case?

First, there will be significant UK domestic price rises as a result of tariffs post Brexit.

Second, even if the UK foregoes tariffs (and it is not clear how) then there will still be significant additional costs on importing that will be passed on to the consumer and that will deliver price increases. This will suppress UK econ9omic growth and destabilise the economy in a way which no domestic counter-measure can address.

Third, there will be substantial impediments put in the way of many UK exports, many of which will have significant detrimental impacts in more vulnerable communities in the UK. This is bound to have an impact on the level of business activity in the UK, which is likely to fall as a result.

And fourth, there is as a result the likelihood that the UK downturn will be much more severe than anyone previously thought likely, and I already thought it was going to be pretty grim.

This results in the very real chance that government deficits will, as a result of the automatic spending multipliers linked to unemployment, be substantially bigger than previously expected.

Will that result in increased tax? Not logically, because that will only make things worse. If Gove does not understand this, that's especially worrying. But the idea that there will be no international willing to support the UK does suggest sterling issues might arise, and that QE will be playing a massive role in funding these deficits.

But what I can say for sure is that we have no clue as to what is going to hit us as yet, but whatever we assume it will probably be worse than we can imagine. There is no win, anywhere, in the current direction of government action (which I dare not call policy, because there is no evidence that it is).