This is the front cover of today's Guardian: 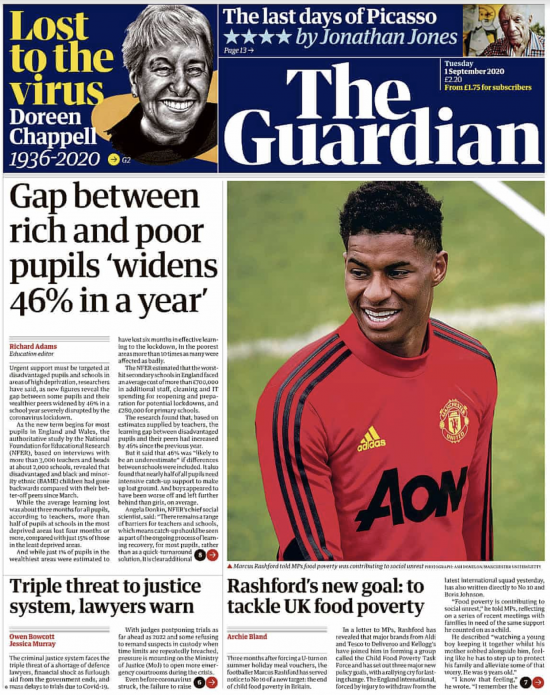 What it makes clear is that some face hunger as a result of increasing poverty in the UK.

Whilst others face literal injustice.

And yet more face social injustice as a result of educational disparities.

And all because of a background of a health system that is still not coping.

But what is the government discussing? They are talking about which very marginal tax rate increases to make, which discussion is anyway (I am quite sure) just a softening up exercise for the claim to be made that there are no acceptable tax increases and so we must have austerity instead.

Our state is failing. The programme with this aim, first put in place by Cameron and Osborne, is now beginning to succeed. The most basic delivery of services is now becoming hard, if not impossible,  in the face of demand. And the planned response is, I have no doubt, to make further cuts, even as we face economic meltdown.

And yet this is a country rich in resources.

Everyone could be well fed in this country.

The people to make our courts, schools, healthcare and so much more could be found. They are in this country, now. Many or doing jobs that add little value to society right now because that’s the way we organise our economy. We refuse to value what is important to our wellbeing. And the result is hunger, injustice, inequality and failing health.

Which is because we believe that we can only have health care, justice and so much else as mere by product of whatever it might be that the private sector wishes to persuade some to buy even though they really do not need it, whilst refusing to accept that some needs go wholly unfulfilled, we end up with this dire situation.

The pretence that tax pays for public services comes with a cost attached.

The pretence that tax creates injustice for the wealthy that requires that the state be kept small has massive consequences.

The claim that there is such a thing as taxpayers’ money and that it is limited in supply imposes rationing on those with greatest need.

And these claims are all fallacies. They are myths propagated by a few to pretend we cannot deliver what is really required in our society.

Despite which many on the left buy into this belief that the state is constrained by a shortage of money from the private sector. Labour did under Corbyn. It still is under Starmer. They too carry responsibility then with their claims that ‘Everything is fully costed’ as the world’s of many collapse around them.

No wonder I get angry with those who say there isn’t enough money when the thing needed to start solving these problems is currently available in almost limitless supply, cost free, given the current state of the economy.

When are we  going to accept that fact, for fact it is?