Government Expenditure and Revenue Scotland is the usual fabrication, whilst hinting at how badly treated Scotland has been

The Government Expenditure and Revenue Scotland (GERS) statement for the year to March 2020 has now been published. It would take a stronger will to live a boring life than I have got to spend much time on this ludicrous statement, but let me note what it is meant to do. As the Scottish government says:

1. Public sector revenue is estimated for taxes where a financial burden is imposed on residents and enterprises in Scotland

2. Public sector expenditure is estimated on the basis of spending incurred for the benefit of residents and enterprises in Scotland

I added the italic, bold emphasis.

GERS compares tax paid in Scotland with spend for Scotland. That earns the following are ignored:

The result is a system designed to overstate the Scottish fiscal deficit.

In the context of that suggestion, the first thing I noted about this year's report was a change in the format of the very first table. Last year it looked like this:

I tore it to shreds then, saying how implausible it was that Scotland played such a significant role in the UK fiscal balance. This year the table looks like this:

Look! The UK has disappeared. Why could that be? To make it harder to make the same claim? Surely not? Or maybe, of course just for that reason, as I strongly suspect. Data has a habit of disappearing when I use it.

And note too that history has got a lot worse this year with all prior-year figures now looking worse than they did last year. The word 'restatement' that might offer an explanation as to why this is does not appear in the report.

So let's look at some data that I have prepared from the GERS dataset issued this morning. First of all there is income and spending data as a percentage of the UK, over twenty years: 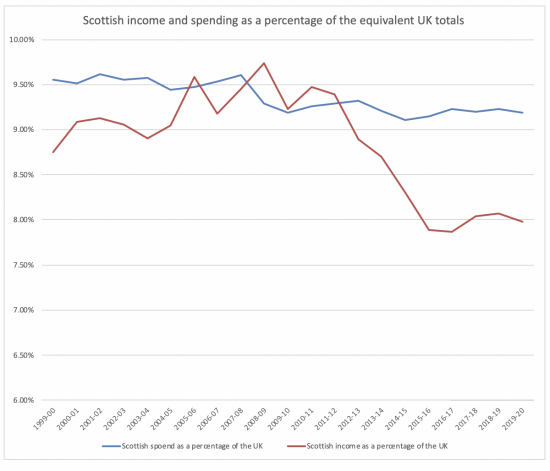 Note I have not shown a full Y axis.

Scottish government spend as a percentage of the UK is falling. But since 2011 its income has fallen more. And we all think we know why.

But before anyone jumps up and down too much about this, let's look at whole of UK data: 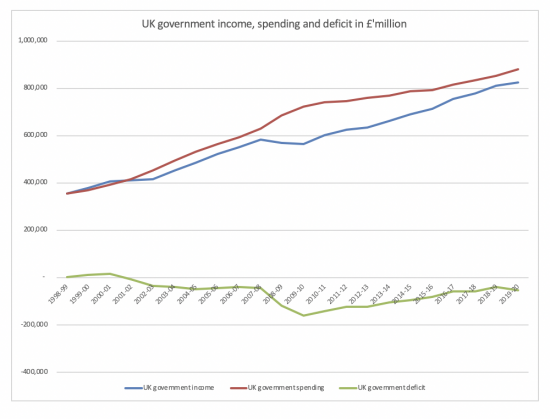 Of course, this is not presented in the same way, and I have not allowed for weighting by inflation or head of population, but the message is clear: if anyone is out of control here it is not Scotland. But what Scotland did not appear to do is benefit sufficiently from the spend of the UK as a whole just as its own economy needed realignment to restore income. That is my point. Spend could, and did, happen in the UK to deal with its financial threat from the City of London, but the same did not happen when oil began to decline in Scotland. That is apparent from this chart: 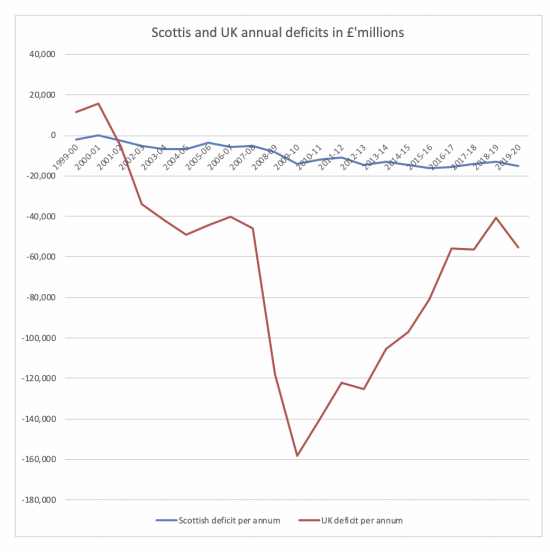 There was no spike in spending in Scotland to compensate for the loss of oil, but there was a spike in spending in the UK to manage the collapse of the City of London. The whole of the UK got a boost then, and Scotland did not. Unsurprisingly Scotland's deficit grew as a proportion of the whole as a result, because the new investment was not for its benefit: 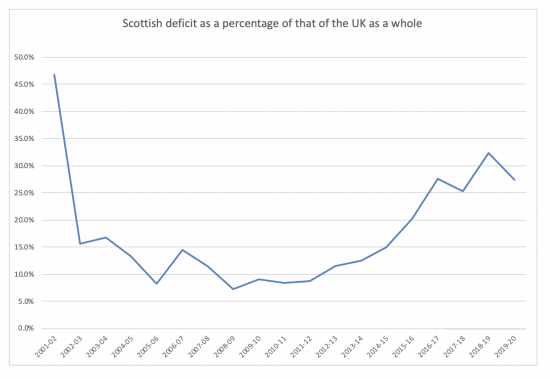 Note that the 2001/02 data was aberrational as the UK was only just in a deficit that year and had actually been in surplus the two previous years, which I have treated as outliers.

And let me go back to the point as to how much of this is controlled by Scotland anyway. This is the answer: 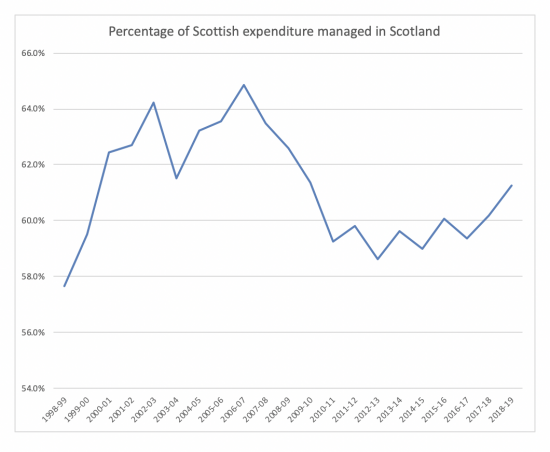 So what you will note is that as Scottish expenditure supposedly rises, and the deficit grows more as a result, much of that is due to increased costs being 'dumped' on Scotland by Westminster. But there  is no proven benefit to Scotland in revenue-generating terms at all as a result of this. Nor is there evidence that all of the tax paid as a result of that additional UK government spend outside Scotland is credited to Scotland for the purpose of this exercise either.

What's the story then? I conclude several things. As ever, this is a fabrication, with the deficit that arises being at least as much the result of decisions made in London and not Scotland.

Second, with so much of spend for Scotland being under London's control it remains quite possible that far too little tax is being credited to Scotland. The declining revenue figures may simply indicate that fact now. As a result, the deficit figures are almost meaningless.

Third, Scotland has not had the spending it needs to move it on from oil, but the rUK has seen spend to help it recover from its own revenue failure.

Fourth, this means that, almost inevitably, Scotland would be better off as an independent nation, and the GERS figures show that.

Fifth, though, it really is time that the game playing, including the elimination of useful data people used in the publication, come to an end. It gives those who produce this information no credit at all and makes us doubt their intentions.

So, use this data with extreme care, but in the meantime ask three things:

One day we may get answers. But not this side of independence, I suspect.