Mythbuster: The Bank of England is independent

The Bank of England is independent of the government

The government granted the Bank of England some independence in 1997, but kept a right of veto over all it does, which means that the independence is pretty limited in practice.

The most recent Bank of England Act was passed in 1998. This described itself as:

An Act to make provision about the constitution, regulation, financial arrangements and functions of the Bank of England, including provision for the transfer of supervisory functions.

Most importantly, this was the Act that supposedly created independence for the Bank of England.

This has to be understood in context. The Guardian reported on the intention to create this independence in 1997, saying:

The Chancellor, Gordon Brown, set the seal on a frenetic first 100 hours of activity by the Blair government when he stunned the City and Westminster yesterday by handing control of interest rates to an independent Bank of England.

From next month, the Government's attempt to take the politics out of interest-rate decisions would mean the Bank would have 'operational control' of monetary policy.

What this makes clear is that the purpose of the move was political: it was to reassure markets that a new Labour government would be seeking to prudent with regard to government finances by passing control of interest rates to the Bank of England.

However, the reality was that all was not quite as it seemed. Section 19 of the 1998 Act said:

(1)The Treasury, after consultation with the Governor of the Bank, may by order give the Bank directions with respect to monetary policy if they are satisfied that the directions are required in the public interest and by extreme economic circumstances.

(2)An order under this section may include such consequential modifications of the provisions of this Part relating to the Monetary Policy Committee as the Treasury think fit.

In other words, subject to some procedural arrangements which were not onerous for the government to comply with, the Chancellor could at any time overrule the Governor of the Bank of England and the Bank's Monetary Policy Committee. This then was 'independence' with a massive proviso attached, which was that what the Bank did was acceptable to the Treasury. The result has been a close working relationship.

This has been especially true since 2008. Since the time of the global financial crisis, which began in that year, the base rate of the Bank of England, which it used prior to the crisis to influence inflation policy, has been at 1% or less, and now (June 2020) stands at just 0.1%, which is a record low. In this situation it is generally accepted that monetary policy implementation through the mechanism of interest rate changes is ineffective, because any rate change is too small to have any real impact. This is the problem of what is called the 'zero-bound'.

Quantitative easing is a tool that central banks, like us, can use to inject money directly into the economy.

Money is either physical, like banknotes, or digital, like the money in your bank account. Quantitative easing involves us creating digital money. We then use it to buy things like government debt in the form of bonds. You may also hear it called ‘QE’ or ‘asset purchase’ – these are the same thing.

The aim of QE is simple: by creating this ‘new’ money, we aim to boost spending and investment in the economy.

Since 2009 £635 billion has been injected into the economy this way by the Bank of England buying government bonds. £10bn of other assets have also been bought. This is now by far the most important tool available to the Bank of England to influence the economy and control inflation, which is the task demanded of it in the 1998 Act. However, in January 2009, in a letter that now takes some hunting to find on the web, the then Chancellor of the Exchequer Alistair Darling set out the terms on which all QE has been provided, which means that the letter is worth sharing in full: 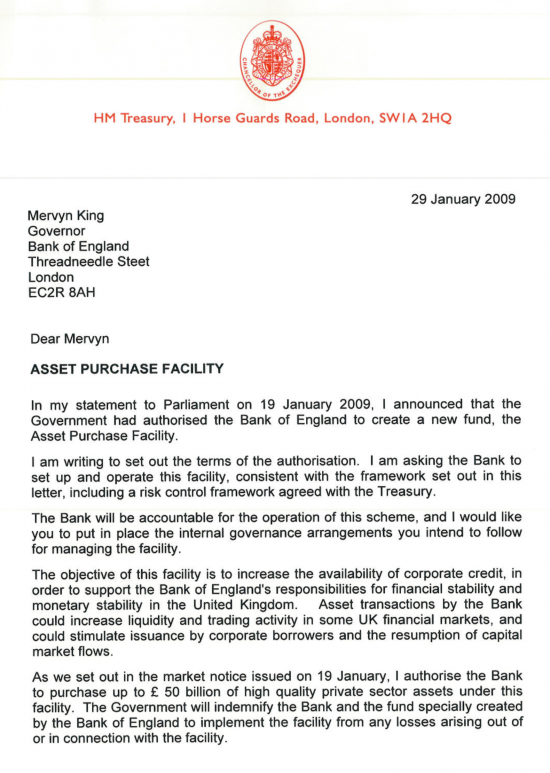 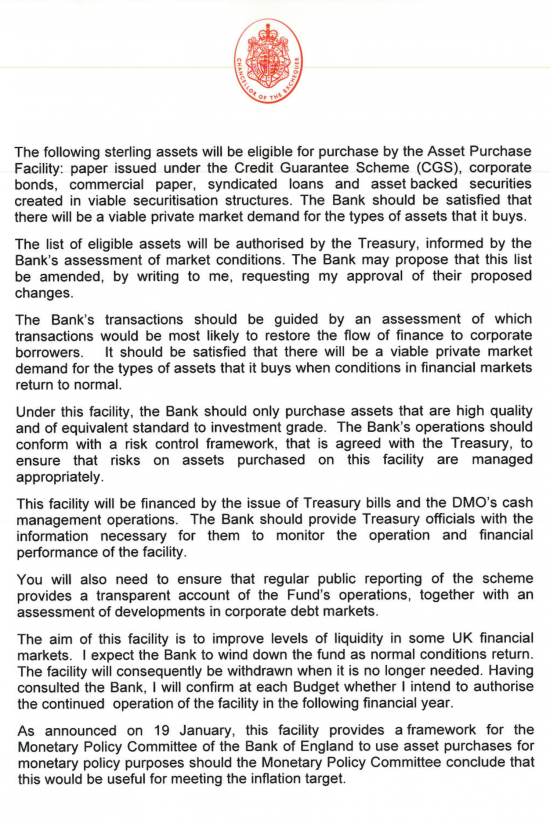 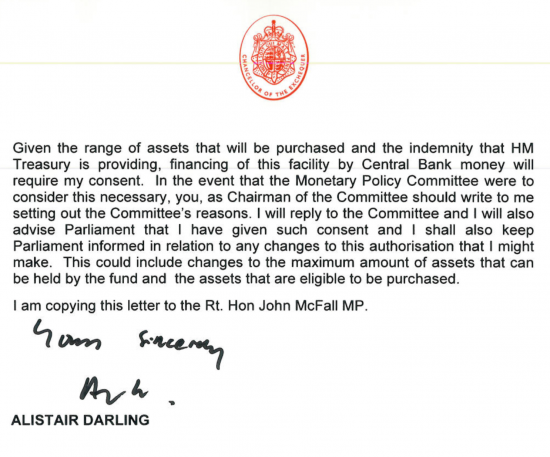 Three things should be noted.

First, the Treasury had to authorise quantitative easing, and has always had to do so since then.

Second, the Treasury authorised the assets to be invested in, and again, always has.

To therefore claim that the Bank of England is independent of the Treasury makes no sense at all. It simply is not. Its major policy is managed under the control of, and for, the Treasury.

Central bank independence is a policy goal of neoliberal economics that seeks to undermine democratic control of the economy and the accountability of the government for it, but it is not what happens in practice.