Mythbuster: The UK national debt is heading for 100% of GDP

The UK national debt is heading for 100% of GDP, which measures our total national income.

And, as the Bank of England has now acknowledged, the chance that any of the debt that it has bought back from the financial markets will ever be resold back into those same financial markets is remote, in the extreme. None ever has been. In that case, for all practical purposes this debt has been cancelled. UK national debt should, then, be stated net of all quantitative easing because that debt does, in effect, no longer exist.

And, if evidence is needed, the government's own accounts reveal that this is how they account for their own debt owing.

In that case the claim that the UK's national debt is going to exceed 100% of GDP is simply wrong when it is expected that much of the UK government debt to be issued as a result of the coronavirus crisis is going to be bought by the Bank of England.

The UK national debt has increased as follows since 1974, with the figures being stated in original prices, and with the data being stated gross i.e. before quantitative easing is taken into account, and net of QE, with the amount of QE issues also being noted by year, with that sum being allocated to the year in which the purchase was authorised: 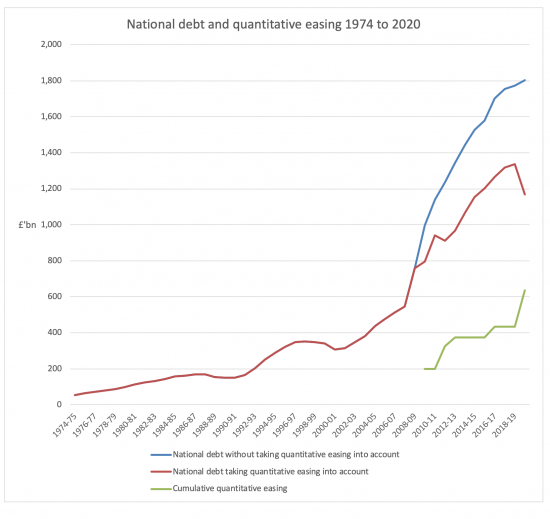 By March 2020 £635 billion of quantitative easing had been authorised by the UK Treasury and the Bank of England. As such the national debt was not £1,800 billion at that time, but was actually a third less, at just under £1,200 billion.

As a percentage of GDP this had the following effect: 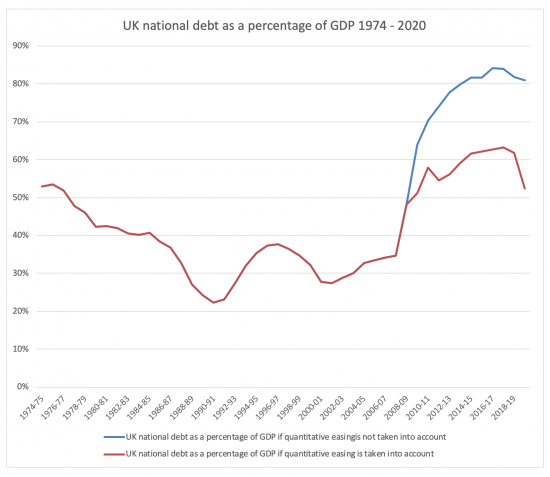 As a consequence, UK national debt as the coronavirus crisis started was at historically low levels.

And per head of population, at current prices to ensure compatibility, the figures are as follows: 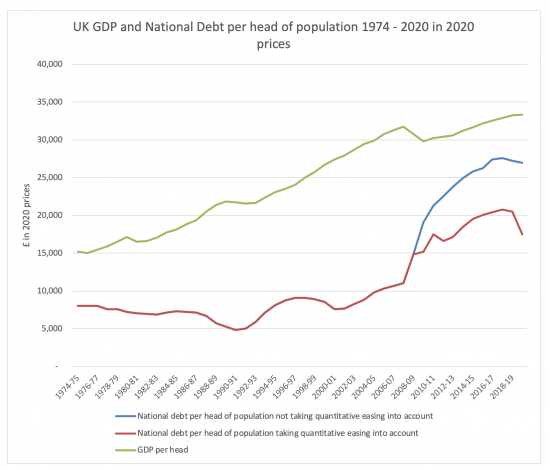 GDP per head has more than doubled since 1975 in real terms, albeit that by no means everyone will feel that.

Notionally national debt appears to have grown, but after quantitative easing it has not by 2020 in proportion to GDP. This might stay true throughout the coronavirus crisis if most government debt issued during this period is bought by the government, as many think might well be the case.

In that case it is simply not true that UK national debt is now heading to be 100% of GDP.

This fact is confirmed by what are called the UK government Whole of Government Accounts. The most recently available are (rather surprisingly) those are for the year to 31 March 2018. Note 20 to those account is as follows: 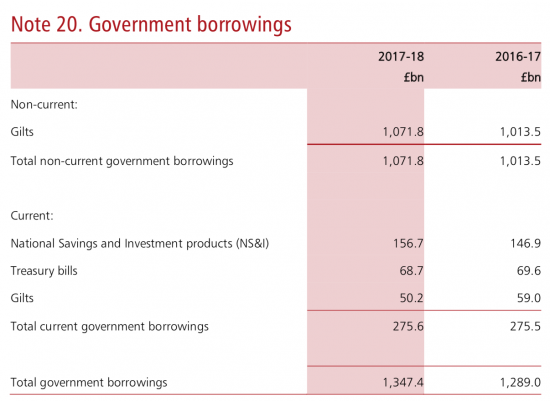 The equivalent figures in the data used to prepare the charts noted above, based upon information from the Office for Budget Responsibility, were £1,317 billion and £1,266 billion.

The government does then recognise that its own borrowings do not include quantitative easing debt in its own accounts and as such it should not claim it owes sums that are not due in its statements on the national debt, and yet it persists in doing so, meaning that all such announcements are wrong.

There are more Mythbusters here