The need for a resilient economy

The Common Weal think tank in Scotland is, in my opinion, the most progressive organisation working on economy ic transformation in the UK right now. That it's Scottish should make little difference to its appeal: much of what it has to say is universal.

This morning it has published a new report on the need for a resilient economy. 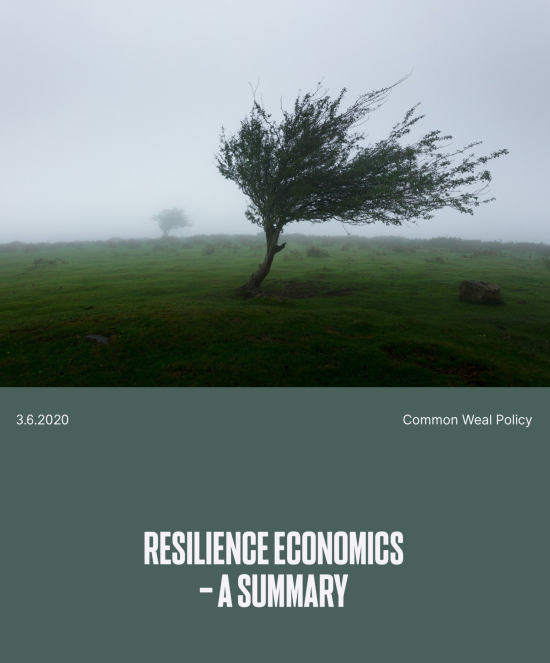 The introduction to the report, which explains the demand for resilience, says this:

Resilience means that we create a society in which people can live good lives – and in which they can continue to live good lives even as things change and crises hit us. To achieve it we must create a resilient society where inequality is low, democracy and participation are high, public infrastructure and services are top quality and readily accessible and community cohesion and public trust are strong. We need a resilient economy, one which creates the good jobs that give people the income to live good lives now, which has the security to make us confident we can live good lives in the future, which useful, diverse, non-exploitative and which does not contain high levels of risk or which falls over in a crisis. And this must all be based on a resilient environment which is always able to regenerate itself after human activity and can therefore sustain our lives now and in the future.

And their explanation of the background to the current crisis is well worth reading:

The world has been dominated by free-market economics for 40 years – but that model has been failing and during the virus crisis it failed very substantially indeed. The same factors which resulted in the financial crisis have also been driving the environmental crises and the virus has shown just how vulnerable our economic system is.

Free market economics is about wealth extraction where powerful economic players can take more and more out of domestic economies. It has created a debt economy and pushed households to get into deeper and deeper debt so they can keep spending. It has created a large industry based on speculation and asset prices which has made those with assets wealthier and wealthier at the expense of those who don’t – this is known as ‘rentier capitalism’. The financial sector (the heart of the wealth extraction industry) went from being an industry that supports the rest of the economy to being the industry the rest of the economy is forced to support. It has stretched its supply chains to global length to pit nations and workers against each other to compete for low wages and low regulation. It has casualised employment and made it more and more insecure, again to extract more wealth by paying workers less.

It has taken out the profits from its production and distribution process but it has left the public purse to pick up all the costs, like paying for poverty and fighting climate change. It has build a complex tax avoidance system to extract more wealth, this time from the public purse and has pushed for more and more privatisation of things that used to be owned collectively. And it has continually reduced democratic control over the economy by removing economic legal power from nation states through coercive trade deals. But of course it has never really abided by its own doctrines – not only has economic protectionism continued (mainly at the expense of the global south) it has demanded continual subsidy during the good times but demanded massive bailouts when things go wrong.

It has resulted in increasing economic and geographic inequality, has brutalised workers in developing nations and caused the environmental crises that now threaten life on earth. But it is the Covid crisis that has really exposed its weaknesses. It is not the lack of economic demand which is causing most business failures but rather the debt liability they have been driven into because of the debt economy. The long supply chains are breaking down because they were designed not to maximise wellbeing but to maximise wealth extraction. And it is the casualisation of the workforce which has left so many people so economically vulnerable and therefore relying on state aid to survive.

Many senior economists and central bankers have been warning about the dangers of the fragility in the system since the last financial crisis. Everyone at least seems to accept that there must be major change to avert a climate crisis – and now we can see just how lacking in resilience our economy really is. So there must be change.

In the interests of full disclosure, I should note that I have advised Common Weal in the past, but had no involvement in this report.