The word decimate is rarely sued correctly: it stands for the culling of one in ten, usually as a punishment in a Roman legion. It will also be inappropriately used in this crisis if it is used to describe the consequence for smaller businesses. That is because the crisis has already resulted in one in ten small businesses being shut, dissolved or liquidated according to the Association of Chartered Certified Accountants. And they expect much worse to come. As they have put it:

And if the lockdown lasts another four weeks, respondents estimate that 38% of the businesses they advise will definitely not be able to access the additional cash they’ll need to survive.

The lockdown is going to last.

In the FT not dissimilar stories are being  related, with it being noted that:

One quarter of companies in the UK have temporarily closed because of the coronavirus lockdown and the majority of those still operating have reported lower turnover, according to the Office for National Statistics.

Meanwhile, a study by Begbies Traynor, the insolvency firm, found that more than half a million companies were in “significant distress”. The analysis was based on county court judgments ordering companies to pay their debts.

It should be noted that this is up, but there is an underlying trend.

But as the FT notes, for a small number of businesses, activity is up at present. Convenience stores are amongst those doing very well, I gather. And then there is Amazon.

The data is, of course, patchy, but it would seem that the story is not. I strongly suspect that significantly more than 10% of smaller businesses will fail in this recession. That is almost inevitable.

It has, of course, to be said that some of those would have failed anyway. That is the way that these things go: significant numbers of small businesses fail at any time. So the question is about excess failures, as it is about excess deaths amongst people. There the telling chart is this from the FT: 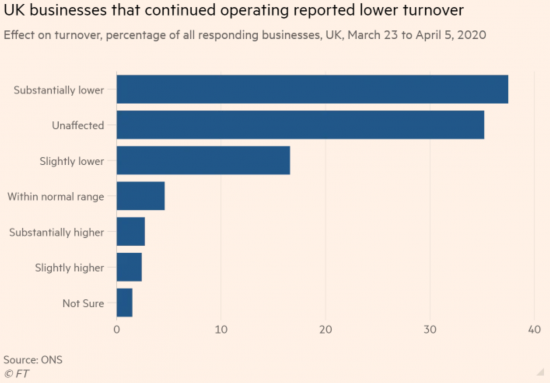 The combined total of businesses with substantially and slightly lower turnovers is the majority of those in the survey. And that is the concern. Some of these may survive, but those with any significant overheads will find it very hard to do so for very long.

There is no doubt that the UK will be facing a significant change in its business landscape after this, and a radical difference in the number of small businesses in operation after it, whilst those that will arise from the ashes (because they will; of that I have no doubt) will be smaller and under-capitalised for some time and not pick up the slack.

There are tough times ahead. It is going to be a very long time before the fat lady sings on this occasion.