The FT has published a chart following the announcement that another 5.5 million people registered as unemployed in the USA last month: 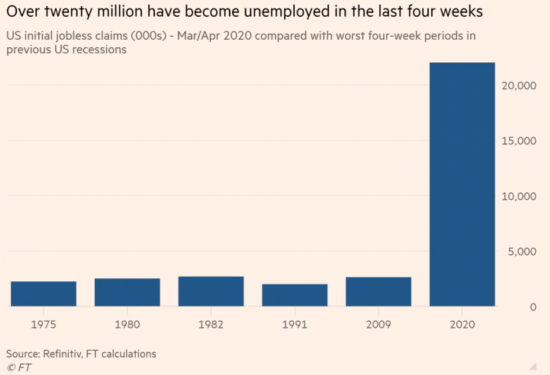 This recession is unlike anything else.

But I have already explained that. As I said on 19 March:

I was told by an economist today that the situation that we face now is exactly like the 1930s. Without wishing to name the person in question, I fundamentally disagree with them. In my opinion the crisis that we face now is nothing like that of 1929 and what followed then, or 1987, 2001 or 2008. There is very good reason for saying so, and it is fundamental that this be understood if we are going to get the reaction to this crisis right.

All of those crises, and the downturns that followed them, were of fundamentally similar type. Overheated financial markets crashed. The result was a decline in demand (largely neutered, it must be said, in 2001 but otherwise very apparent). That downturn in demand then lead to supply-side problem as businesses reacted to the falling demand for their products, and in turn this then lead to unemployment and spiralling economic issues of varying degrees of significance on each occasion.

The important point to note though is that the cycle was:

This time the cycle is very different. The crisis has started with a real issue in the economy. A pandemic has created what, initially, was a supply-side shock: lockdown resulted in almost immediate supply-side issues, appreciation of which was only deferred by the Chinese New Year. Thereafter, and in this case not long after, two demand-side issues emerged. One, arising as a result of fear and further lockdowns, has been the virtual collapse of demand for certain goods and services, whilst simultaneously there has been panic buying of a limited range of other products. And then, but really only then, have financial markets realised the scale of the crisis that 21st-century capitalist economies are facing as a result, and massively marked down share prices.

In other words, the sequencing this time is:

The net outcome is the same, but the route to it is utterly different.

As a result to pretend that this downturn can be treated like others, for example like that of the 1930s, is at this moment wholly inappropriate. It cannot be.

In effect, in every other crisis the economy has underperformed. But this time we've closed it.

Sop in other recessions the requirement has been a stimulus. But this time the economy is shut. And it will take some time to re-open. Try too quickly and three things will happen.

First, businesses will fail because of a lack of capital.

Second, people seeking to spend and unable to do so might drive up prices in the very short term.

Third, more instability will follow, especially if the stimulus is accompanied by too big a relaxation of lockdown that then has to be heavily reversed.

And no one has ever tried to do this before.

Which given all else our government has got wrong is not encouraging.