The ONS data on deaths to 3 April has been issued this morning. A summary of the overall data, which is what matters is: 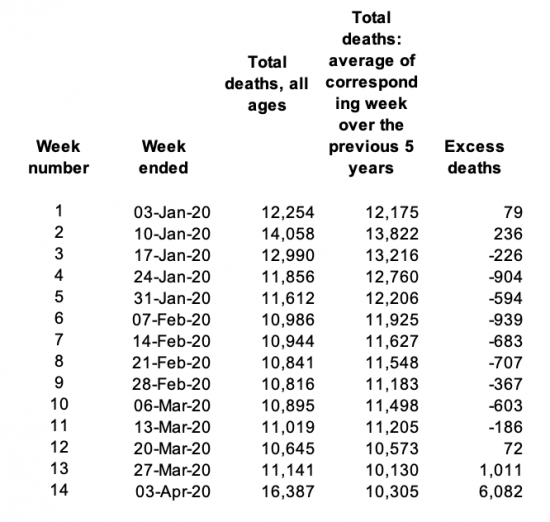 I stress that I am well aware that the number of death certificates mentioning Cvid 19 is lower than the number of excess deaths. I always expected that to be true. Without testing doctors do not certify a cause of death. They suggest the obvious reasons. For those over 85 'old age' is acceptable with further explanation being required.

That is why the only number that matters is excess deaths. It would seem that given that the death rate was running at below average for many weeks before March that it is likely that the number of excess deaths by 3 April was in excess of 7,000, and most likely given that the underlying expectation was for lower than average deaths, somewhat more.

The officially reported number of UK deaths to 3 April was 3,605.

It is therefore likely that the true number of coronavirus related deaths in the UK is at least double the reported number.

Except, and I stress this point, that is also very likely to be a serious understatement. That is because deaths are often registered late. That is because unexpected deaths in the community will need to be referred to the coroner. For those occurring in private homes a post mortem will likely be necessary to establish the cause of death and a death may only be registered after the post mortem report has been sent to the GP with a cause of death so a death certificate can be issued. Since there is now reported to be a big backlog in post mortems registrations of deaths are also likely to be delayed and will not be captured in a timely way by the ONS, which only reports on registered deaths. In that case the police may have better data than anyone right now since they have to visit all unexpected deaths at home.  A policeman in London has said he was called to confirm 15 deaths at home on a single recent day.

The true horror of this crisis is still being hidden from us.