Deficits are going to skyrocket but taxes and borrowing aren’t, because QE is going to cover the cost of coronavirus

The FT has this estimate of the scale of the UK government budget deficit in 2020/21 in the paper today: 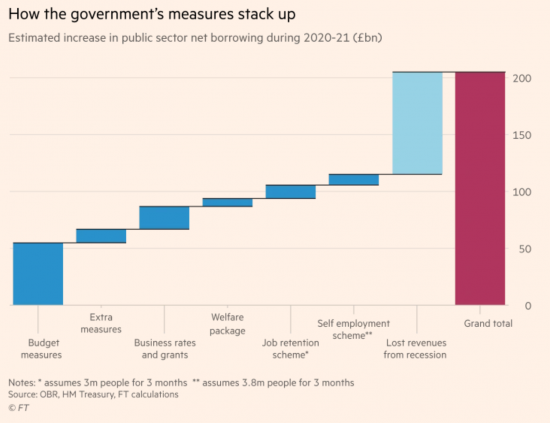 I think this is a serious underestimate.

Add in the potential for substantial post-lockdown unemployment as hundreds of thousands of businesses will fail either during the lockdown or when they try to restart due to then having insufficient working capital, coupled with the need for significant increases in public spending on the NHS and much else and the deficit is going to skyrocket.

Once the necessary support measures to start the economy going again, when that happens, are also added in I think it's quite possible to imagine this estimate at least doubling.

It took more than a decade for UK notional national debt (without QE being taken into account) to increase by £1 trillion after 2008. It will take much less time to repeat that on this occasion. However, after QE (which cancels the debt that deficits notionally create because the government buys its own debt back when it does QE, and it cannot owe itself money) the increase in real debt may be quite modest in my prediction. QE funding, or variations on it, will run almost in parallel with the deficit in my expectation, as it did for much of the period from 2009 to 2014. As a result the supposed 'cost' to taxpayers will be minimal.

We need to get our heads around all this, and soon.