Coronavirus may precipitate a crash but it won’t be its cause, which will be the overstressed state of the world economy

The FTSE 100 chart as I started to write this looked as follows: 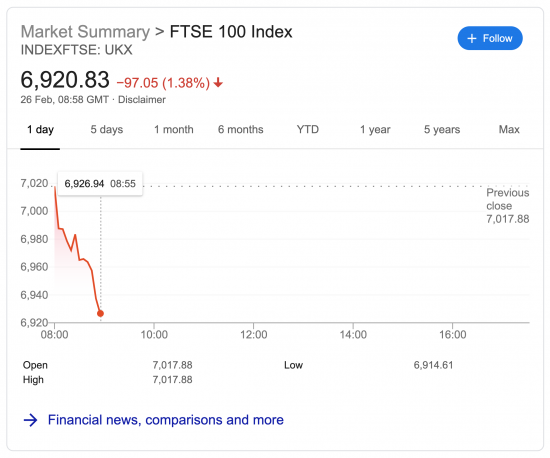 That's not pretty. And it's the third day in a row of sell-off, the cause being the feared consequences of coronavirus. But, much as that virus is a real threat - and if it kills one in fifty people who get it, as seems possible, there is real threat to well being in its spread - coronavirus will only be the catalyst and not the reason for a global financial downturn if one happens, as might be possible.

The reasons should be obvious. Coronavirus would not be the issue it is in economic terms if we did not have such an interconnected world, where supply lines are stretched to their limits so that many companies are at risk from the slightest disruption to their systems, which coronavirus is already creating, and which could get much worse.

And nor would coronavirus be such a threat if households in many parts of the world were not already over-stretched with debt, meaning any disruption will tip many over financial limits and into serious financial risk of bankruptcy.

Whilst governments in the west, in particular, have for so long walked away from any crisis that has faced them and said that the market must find a solution that on occasions such as this, where markets will not be able to deliver on anything like a timely basis, leave their abandoned competence to manage critically exposed.

Coronavirus is a real threat whose significance I do not underestimate.

But the calamity it may create is because of a transmission mechanism wholly unrelated to health. That transmission mechanism is the fragile state of an economy maxed to its limits by a neoliberal logic that has presumed that all contingencies and provisions for prudence must be removed from the global financial system in the name of maximising financial returns.

And now those returns won't happen.

And the system will not have the resilience to manage the threat that this poses.

It's the over-stressed state of the economy that coronavirus will really reveal.

If it does the world might never be the same again.