There’s no surprise that the Institute of Economic Affairs wants the UK to be a tax haven: it fits with their agenda of destroying fair markets

I could not help but be amused by this juxtaposition in The Times this morning: 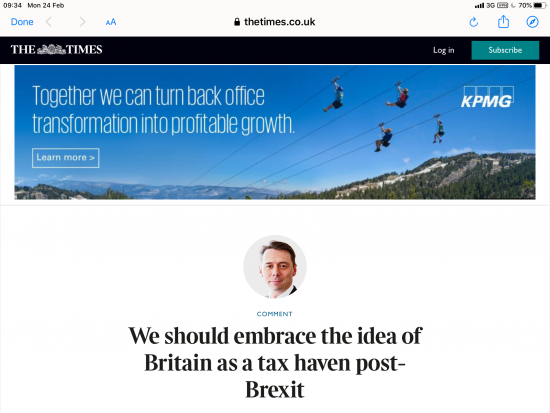 I presume KPMG did not ask to be associated with this feature from Mark Littlewood of the Institute of Economic Affairs, but as the biggest tax havens operator amongst the Big 4 accountants I doubt they object.

Littlewood is spouting his usual nonsense as far as I can see. The IEA has been promoting tax havens throughout its existence. After all, it survives and thrives on secrecy, having never disclosed its funders.

And it exists to promote inequality.

Whilst its respect for the rule of tax law is not great. Just read Richard Teather’s book on tax havens for them published in about 2005 as evidence of that: it got as close to endorsing the merits of tax evasion as a mechanism for undermining the democratic choices of government as I suspect it dared go.

And now in post-Brexit Westminster, where the Institute of Economic Affairs is closer to the heart of government than it has ever been here is its director suggesting the UK embrace the idea of being a tax haven.

So let’s summarise what that means. It firstly requires that the transparency necessary for the proper operation of markets be denied. Littlewood is, then, arguing against proper markets.

And he is arguing that the UK should seek to be the depository for the proceeds of crime and corruption.

Whilst he is arguing that the UK should engage in economic warfare with the world's democracies to undermine the tax that they have the legitimate right to collect.

And he is arguing, as already noted, for the increase in inequality in society that tax havens promote and which is so harmful to markets and society at large.

This is what embracing a tax haven means. And what is worrying is that there will be those who will listen to him.