HM Revenue & Customs published a 'factsheet' on Monday on the supposed success of the 'Diverted Profits Tax' (DPT), introduced by George Osborne in 2015 and then commonly known as the Google Tax.

The fact sheet is really quite strange and makes some claims that are very hard to undertsand, or seemingly justify. This is the summary:

Many of the figures used in this report are hard to reconcile one with another, but I am going to focus on two issues. The first is the claim that DPT has increased the VAT yield by £2 billion.

HMRC must have their reasons for saying this. I am curious as to what they are. VAT is, after all, a tax on end consumption in the UK. It is not a tax on most business (the financial services sector is the main exception). And it is a tax that is meant to be neutral on imports and exports. There are detailed arrangements in place to make sure that goods and services imported are subject to the tax and those exported are not. The rules are not perfect, but they work, overall at present. And what that means is that if supplies are made to end consumers in the UK then they should be subject to VAT. And if they are not made to end consumers in the UK then they should, at the end of the day, not give rise to a charge.

In this context there should, logically, be no additional net VAT due in the UK as a result of any DPT action. How the determination that a supply was being made for VAT purposes in the UK seems to be entirely independent of the DPT and corporate residence rules: distance selling is a well-known VAT concept that appears unaffected by any DPT charge, as far as I can see.

I admit I can see how it is possible that business was relocated into the UK within group structures as a result of DPT. I believe such reorganisation to be possible. And more VAT might appear to be charged as a result. But I very strongly suspect that the resulting supplies were not to end consumers: they were most likely business to business transactions, and quite possibly in the same group. In that case it is also highly likely that the additional billing would give rise to an equal and opposite input tax VAT reclaim in anther entity, or to an eventual export with VAT being due.

My suggestion is, then, that this claim may well be deeply misleading. Unless it is being suggested that DPT discovered previously VAT undeclared distance selling to  UK consumers that was not on HMRC's radar (and I think this unlikely, and it would also imply that tax gap estimates were seriously wrong) what has actually happened is that more VAT has been billed, and also recovered as input tax within the VAT system and the net real recovery is vastly smaller than HMRC claim. If that's the case the suggestion that this is a 'factsheet' might look seriously misplaced.

The second very odd-looking claim is that the most complex businesses are responsible for 40% of the country's tax receipts. This is roughly what UK tax revenues are expected to be this year: 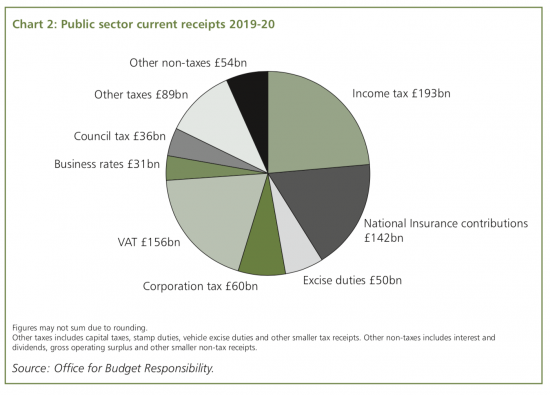 You could claim business pays business rates and corporation tax, and I would broadly agree.

You cannot claim it pays most of VAT, because it is designed to make sure it does not.

It does not pay income tax, although its employees might.

And no one seriously thinks it pays any national insurance: gross wages are simply reduced to cover the employer's contribution.

Excise duties are passed on to consumers.

So the claim that big business contributes £251bn of tax receipts is grossly misleading: it merely acts as agent to pass much of this on. They do not pay it. Again, then, this is a false 'fact'.

HMRC have, I suggest, a lot of explaining to do.

Subsequent to publishing the above HMRC's press office asked me if they might have the right of reply. I agreed. This is what they have said:

An HMRC Spokesperson said: “The publication highlights that Diverted Profits Tax (DPT) is encouraging businesses to change their behaviour, structures and policies, and is securing additional money for the UK’s vital public services.

“As a result of our DPT work companies have agreed to restructure, with economic activity being billed through UK VAT registered companies rather than offshore entities. In future UK VAT will be charged and collected, where previously that was uncertain.

“Large businesses account for around 40% of the UK’s total tax revenues each year, both in respect of their own tax liabilities, but also collecting revenues — VAT and employment taxes — and paying across to HMRC. This highlights the importance of HMRC’s related compliance work in ensuring they fulfil all their obligations.”

I have three comments.

First, if HMRC really cannot be sure that £2 billion that should have been billed by our largest companies was billed here then I suggest that their management of the tax system is more worrying that even I have dared presume, and their tax gap estimates have a much greater margin of error inherent in them than they ever admit.

Second, the claim that large businesses account for 40% of tax remains wrong: they don't account for it, they merely act as paying agents for it.

Third, it would be great if they would actually answer the questions: there has been no attempt to do so here.