I mentioned my concern about the CEO's of the world's largest companies thinking that they can decide what reporting the stakeholders of their companies need yesterday. I have now had time to look at the report that they have issued, alongside the Big 4 accountants. This is, of course, a World Economic Forum output, and the WEF is, as Marianna Mazzucato noted yesterday 'the place where billionaires tell millionaires how the middle classes should live'.

The WEF report is here. There is much puff, like this:

This report proposes a common, core set of metrics and recommended disclosures that IBC members could use to align their mainstream reporting and, in so doing, reduce fragmentation and encourage faster progress towards a systemic solution, perhaps to include a generally accepted international accounting standard.

I welcome the idea of an accounting standard. But its notable that the International Financial Reporting Standard are not a party to this.

I also note that the commentary says:

To the maximum extent practicable, the report incorporates well‑established metrics and disclosures for the express purpose of building upon the extensive and rigorous work that has already been done by those who have developed the existing standards. The objective is to amplify those standards and more fully harness their synergies rather than create a new standard altogether.

In truth, this might simply be summarised as 'do some selected parts of the Global Reporting Initiative standards', because that's where the vast majority have come from.

And that includes this: 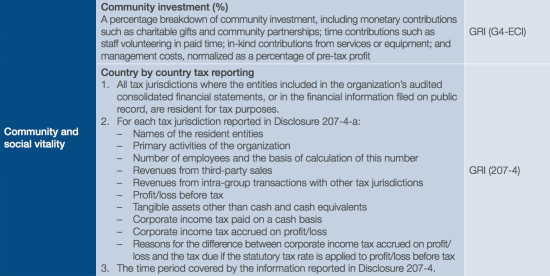 The notable fact in all this report is that the Big 4 have, for the first time ever, endorsed public country-by-country reporting.

It's taken those firms seventeen years to get to this position. Many of them were major opponents along the way. And now they say it is a necessary part of reporting.

They're right. It is.

I just hope that they move a bit more quickly on the reporting that we really need on climate change, which is sustainable cost accounting.