Javid knows he’s setting out to blight the economy, and is doing it anyway

In May 2016 Sajid Javid had an article in the Telegraph which he reproduced on his personal blog. The headline says it all. But read it. And then appreciate that he knows exactly what he is now doing to British business and is doing it all the same: 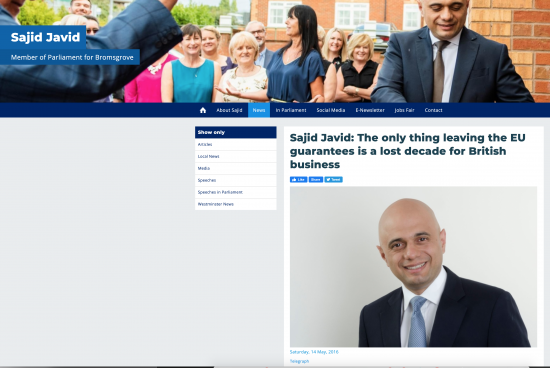 I was somewhere in West London, meeting with one of the area’s many television companies, when the EU Single Market really began to make more sense.

I was Culture Secretary at the time, and the company’s chief executive was explaining why they’d chosen the UK for their main base outside North America.

It had a lot to do with wealth of creative talent here. But the clincher was the Single Market – it meant they could broadcast to up to half a billion viewers across 28 countries and only have to deal with regulators in the UK. Thanks to common standards across Europe, they didn’t have to worry about meeting the demands of dozens of different local bureaucrats.

It was a similar story when I worked in financial services. If I wanted to seal a deal in, say, Paris, all I had to do was hop on a train, get the paperwork signed and head home again. My biggest worry was whether I’d be back in time to put the kids to bed.

I’m a Eurosceptic and proud of it. I think the Euro is a bad idea. I have no time for ever-closer union and I’ve long been a vocal critic of Brussels’ worst excesses.

But, just like Bank of England Governor Mark Carney and IMF head Christine Lagarde, I still believe that Britain is better off in. And that’s all because of the Single Market.

It’s a great invention, one that even Lady Thatcher campaigned enthusiastically to create.

The world’s largest economic bloc, it gives every business in Britain access to 500 million customers with no barriers, no tariffs and no local legislation to worry about.

It’s no surprise that nearly half of our exports go to other EU nations, exports that are linked to three million jobs here in the UK. And as an EU member we also have preferential access to more than 50 other international markets from Mexico to Montenegro, helping us to export £50 billion of goods and services to them every year.

Even companies that are neither exporters nor part of the export supply chain – your local corner shop, for example – benefit from the economic growth that kind of access brings.

And it works for imports too – British consumers benefit from lower prices on the things they want to buy, and British companies can easily import the raw materials they need to make goods. There’s no doubt about it, remaining in the EU is good for business.

Of course, the Brexit camp say we don’t have to be a member of the EU to benefit from all this.

That, should we vote to leave, Brussels would instantly offer us full and easy access to the Single Market and influence over regulations. All the good stuff, none of the bad.

It sounds like a no-brainer. But it’s just not realistic.

For one thing, even Europe’s biggest fan would admit that it’s hardly a byword for thrusting dynamism.  As Iain Duncan Smith said this week, the EU only moves as quickly as its slowest member state – and getting 27 nations to agree terms for British access to the Single Market would simply not happen overnight.

Then there’s the nature and scope of any access agreement.

Today, almost 80 per cent of British jobs are part of the service sector – everything from that TV company to pensions to education.

It’s a sector with exports of £226 billion, nearly half of which go to Europe. But of the trade agreements the EU has with more than 50 countries around the world, not one gives service industries the same level of guaranteed access as the Single Market. Not one.

Unless the exporting country submits to the importing country’s rules and local regulator, access will be denied. Maybe the EU will break the habit of a lifetime and come up with something new just for us.

But I wouldn’t want to bet the jobs of millions of British workers on it.

Finally, the negotiations themselves would be extremely lopsided, giving the upper hand to our rivals.

Forty-four per cent of our exports go the EU, but only eight per cent of the rest of the EU’s exports come to the UK.

One of the advantages of EU membership is that we get to negotiate wider and deeper trade deals from a position of strength. If we leave, the boot will be on the other foot – and that will put Britain at a serious disadvantage.

And who could blame them? If I was in their shoes, I’d do the same. If Germany left the EU tomorrow, I’d make damn sure any trade agreement we reached put British businesses first. I’d be failing in my job as Secretary of State if I didn’t.

Business leaders from kitchen-table start-ups to vast multi-nationals are already telling me that the uncertainty over the referendum result is causing them to delay investment decisions, to think twice about creating new jobs.

If we vote to leave, that uncertainty won’t end the morning after the referendum. Even the most conservative estimates say it could take years to secure agreements with the EU and other countries.

Having spent six years fighting to get British businesses back on their feet after Labour’s record-breaking recession, I’m not about to vote for a decade of stagnation and doubt.

I can see why some people want to leave the EU. Arguments about national identity and sovereignty pack an emotional punch. But for anyone who cares about British jobs, it comes down to one key question.

Do businesses want the benefits and security of continued access to the Single Market, or the instability and uncertainty of a lost decade?

However you feel about Europe, whether you’re an enthusiastic federalist or an ardent advocate of leaving, that is the question you have to answer on 23 June. And from where I’m standing, there’s only one answer – a vote to remain.

The only possible conclusion? He is destroying British business, deliberately.