Johnson’s attitude towards Scotland is one of unlimited contempt

Boris Johnson has replied to Nicola Sturgeon's formal request for a referendum on Scottish independence: 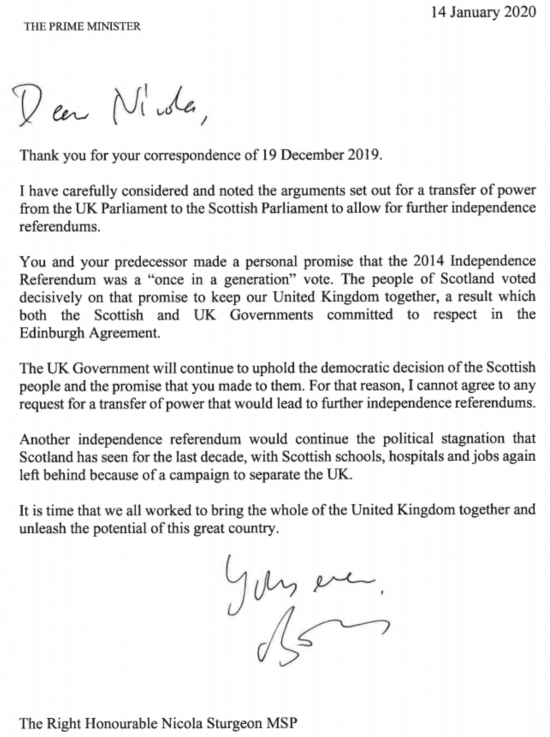 The reply is worrying for a great many reasons.

Forst, it is because of the absence of reasoning supplied. It is not sufficient to say that the future of Scotland was determined by the comment of an SNP leader encouraging people to vote in 2014. But that is the only actual reason given for rejecting this request. Johnson knows that's a ridiculous argument, but he uses it anyway.

Second, to argue that to deny the people of Scotland a vote is to uphold democracy is absolutely absurd: it is very obviously the opposite of that.

Third, it is also very obviously true that Scotland has not stagnated as a result of the actions of the Scottish government in the last decade: what they have had to deal with is the dramatic fallout of a succession of Tory governments in London each of which has been determined to deliver policy intended to make Scotland stagnate.

And the demand for unity is, in the circumstances, so crass - and so betrayed by the abysmal behaviour of Tory MPs towards the SNP in Westminster - that there is not a person who could take it seriously.

The letter is, then, notable for the absurdity of what it does say.

But what is not said? Everything really. There is no suggestion as to how the grievance that so many feel in Scotland will be addressed. Similarly, there is no discussion of how devolved power issues will be addressed under Brexit. Nor is there an explanation as to how the budget crisis Scotland faces because Westminster is not going to announce new fiscal policy until March can be tackled in future. There is, in fact, nothing said, at all.

The only possible conclusion from this is that the policy of this government towards Scotland in general and the Scottish government, in particular, is to display unlimited contempt. It's as if the colonial; era was back and it's time for the natives to learn their place and be grateful for it.

This is not going to end well.

It has, most especially, not to end well for Johnson.

And the bizarre thing is that any thinking person knows that he is on the wrong side of history here. Scotland cannot be held in a Union against its will forever. And the more that Union is imposed the greater the will to leave will be.

So the real question is why Johnson is setting himself up to fail? Or is to simply that he already thinks his time in office will be limited - because there is little doubt he will bet bored of being prime minister in a while, just as he got bored of being Mayor of London - and he thinks it will be for others to sort out the mess? The classic FTSE CEO attitude, in other words. I have a suspicion this may be the case. But the cost to the country of his indifference is going to be enormous.