As I noted yesterday, the LibDems have pledged to run budget surpluses of at least 1% in normal times. And they have pledged to keep pension deficits to no more than 1% in recessions.

This is the data on deficits since 1946, assembled by me this morning from House of Commo0ns, ONS and OBR data: 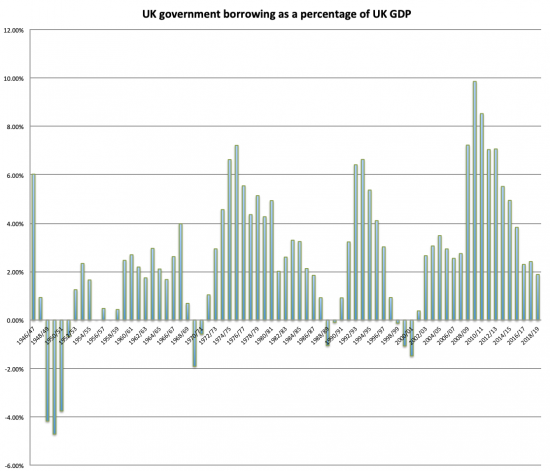 First, note how rare surpluses are. There have been eleven, two so small they are hard to spot.

Then note how commonplace deficits of more than 1% are. There are 52 of them in 73 years. They are normal, then.

And there is good reason for this. To a very large degree governments have no control over their deficits. They are the borrower of last resort. Sectoral balance analysis shows this. I do not have time this morning to write extensively on this issue. I recommend the introduction to the subject from the Gower Initiative on Modern Money. From the perspective of the current issue, and quoting GIMMs:

When we talk about the UK economy we are referring to the nation’s businesses, households, local and regional governments and other institutional bodies.

Starting with the basic rules of accounting for every financial asset there is an equal and offsetting financial liability, this means that deficits and surpluses must always cancel out across the financial system.  If the private sector is in surplus, then by the rules of accounting, the government sector must be equally in deficit.

And this is exactly what happens, with the graph again being from GIMMs:

The rest of the world consistently saves in the UK. As a result the UK runs a deficit. And when, in times of recession the UK saves, as it does at such moments, the UK government's deficit grows because it has no other option: as the money creator and borrower of last resort this is what inevitably happens, not by government choice but as the inevitable consequence of the decisions of others.

In other words, Ed Davey will not have the ability to deliver his planned outcome, whatever he thinks.

So, not only has he promised austerity and pro-cyclical policy which is the last thing any responsible government should do, in practice he does not understand that control of deficits is simply not within his control in the way he claims. This makes the policy an even greater indication of economic weakness than it initially appears to be. Making bad promises is electorally daft. Being incapable of delivering on them just makes doing so even more unwise.