The Institute for Fiscal Studies finding that more UK tax is being paid by a smaller group at the top of the income scale resulted in some fairly predictable reactions in the media yesterday.

Economia magazine from the Institute of Chartered Accountants in England and Wales reported that:

This, of course, is not true. We are not reliant upon such people. They simply pay more tax because they are convulsing more than the rest of us.

And, we owe them nothing in exchange. As modern monetary theory shows, public services are not dependent upon our ability to raise tax: they are instead dependent upon our ability to find people to work in those public services. In that case the idea that we are, somehow, in debt to those who make large tax payments on their disproportionate incomes is factually wrong: instead those tax liabilities indicate the fact that we have not, as yet, got our tax system, or our economy, in good order so that the rewards are both government spending and economic activity are fairly distributed.

But, if Economia's comment can be put down to a lack of political and economic understanding then the comments made by the Daily Mail cannot be. They featured this chart: 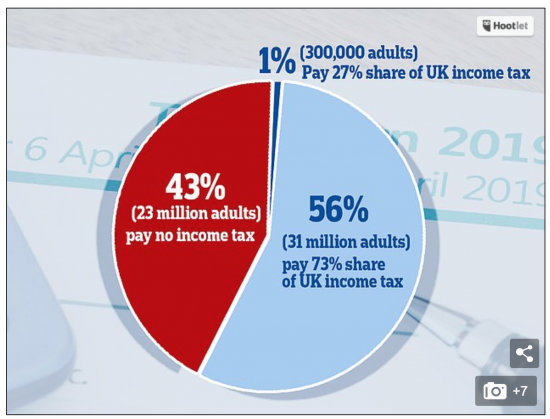 And they then made the point that:

Experts have warned the UK is not 'all in this together' as new research shows a record number of people - 23 million people - now pay no income tax.

Policy analysts warned of a threat to the 'contributory principle' that citizens have to pay in to the public purse to receive services from the state, and said it meant fewer people pushing for low taxes or value for money from government spending, since they themselves would not be footing the bill.

The group of adults who pay no income tax includes the unemployed and home-makers with no earnings, as well as retirees, and anyone who earns less than the tax free allowance.

I added the emphasis: the inclusion of the unemployed is wholly unjustified: officially they make up a tiny proportion of society, of course.

And the 'experts' who commented were all, mysteriously, from right-wing think tanks, like this:

Daniel Pryor, Head of Programmes at the Adam Smith Institute, said: 'These statistics put to shame the idea that the rich aren't paying their fair share - in fact, top income earners pay the vast majority of tax in the UK.

'Income tax hurts investment, economic growth and innovation, and it's good that many Brits on lower wages are paying less.

'This does, however, create a worrying political issue: fewer people having a direct stake in pushing for lower taxes or getting value-for-money from government.'

I very strongly suspect that there is an agenda in play here. I have long thought that the Tory plan to take people out of income tax was deliberate. I have always suspected that the intention was to claim that those who did not pay tax do not count, and that in the long term those on the political far-right would like to recreate a link between income tax payment and the right to vote.

The fact that there is little link between income tax payment and overall tax payment is something that those making these claims wish to ignore: those on the last levels of income in the UK very often have the highest overall tax rates because of the VAT, council tax, other indirect taxes and charges such as the BBC licence fee that they have to pay out of low incomes.

Those on the highest incomes also very often have the lowest overall rates of tax. This is partly because of the extraordinary range of allowances and reliefs that are available to them and because when you have very high income it is possible to divert large parts of your earnings to a company, and pay very low rates of tax as a result, and to generate capital gains, where rates are also far below those paid by most who work for a living.

These facts, for facts they are, are ignored by those who comment on articles such as this for the Daily Mail. There is good reason for that. Their agenda is to promote a falsehood, which is that the rich pay most tax when as a proportion of the incomes that is almost certainly not true. But, more worryingly, I think that they are now extrapolating that to not just a claim to unwarranted virtue, but a claim to sole participation in the control of society that is profoundly anti-democratic.