CommonSpace has announced this today: 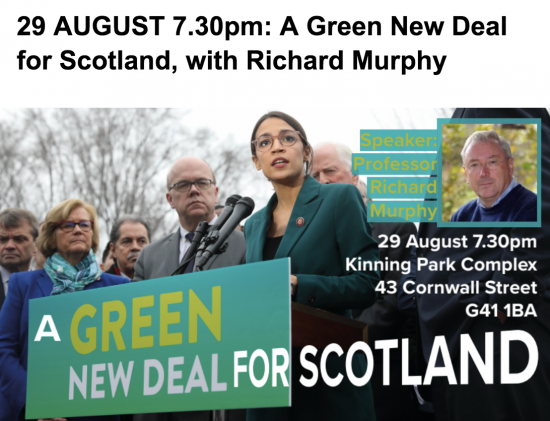 Climate Emergency demands a rapid transformation in every aspect of our economy, from how we travel to how we heat our homes.

The Green New Deal has been advocated by Alexandria Ocasio-Cortez and Bernie Sanders in the US and Nicola Sturgeon in Scotland as a way of making such a transformation happen.

Inspired by Franklin. D Roosevelt's New Deal in the 1930's, which responded to the Great Depression with enormous public investment in new infrastructure building schools, dams and bridges, the Green New Deal seeks to end the era of austerity and expand state intervention across the economy.

But can Scotland have its own Green New Deal? How would it be financed? What would change and within what timeframe?

Richard Murphy, professor of Political Practice in International Political Economy at the University of London, is one of the leading advocates of the Green New Deal in the UK, having been a founding member of the Green New Deal Group in 2007 and authored numerous works on a Green New Deal. Murphy has also written on the economics of Scottish independence, arguing an independent Scotland could break from the neoliberal UK system if it took a radically different approach to tax and public investment.

To book your place for this forum, visit the eventbrite here.

PS I am open to doing some other events as I'll be up - if that turns out to be possible. Mail me if you're interested.