Tax Justice UK - which is affiliated to but not the same as the Tax Justice Network, and whose advisory board I sit - was featured on the BBC' Countryfile last night talking about the thorny subject of inheritance tax reliefs. Great work by them, I say. And this is their blog post on the issue. I won't paraphrase it:

Politicians are giving some of the wealthiest families in the UK generous tax breaks, money that cuts into the cash that could be spent on doctors or teachers.

Tax Justice UK’s new research finds the government is handing out up to £666 million a year in inheritance tax reliefs on land and business property to families who are already well off.
â€‹
Inheritance tax is unpopular, but most people don’t own enough to pay it since every couple can pass on up to £950,000 of their wealth tax-free.

Our research shows that if you're very well off there are additional ways of cutting your bill.
â€‹
This graph taken from the Office for Tax Simplification gives a sense of how the effective inheritance tax rate goes down for the really wealthy. 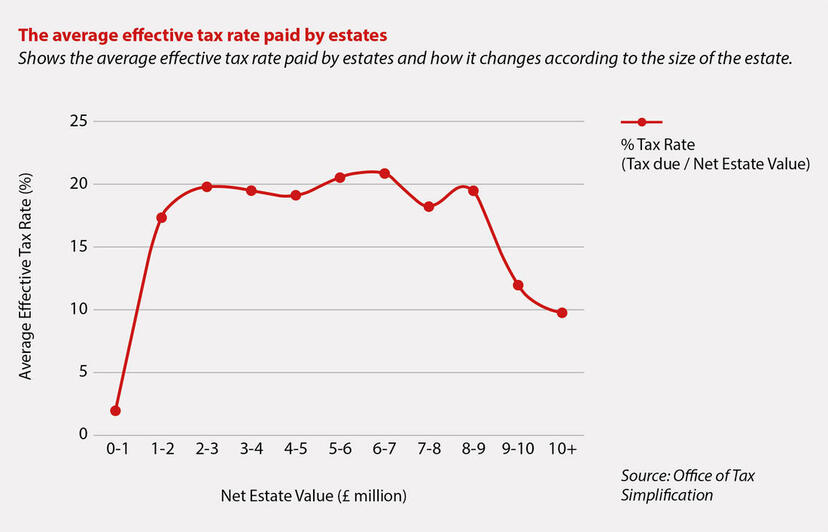 The idea is to make it easier to keep farms and businesses in the family after death. On paper farmers and family businesses often look wealthy - they own lots of land or buildings - but might have limited amounts of cash to pay any inheritance tax. But these reliefs are expensive - costing a billion pounds a year.

So who’s actually benefiting from this tax break? Tax Justice UK asked HMRC and what we found is deeply worrying. Up to £666m annually is going to already wealthy families. In 2015/16 - the latest years we have figures for - over 71% of the tax break went to families with farm and business property worth over £1m. At the very top, 51 well off families with business property assets shared roughly £6.4m each in tax breaks.

For more detail read our report: ‘In Stark Relief: how inheritance tax breaks favour the well off’, which you can find here.

Beyond the fact that these reliefs give an unfair government subsidy to the already wealthy, this is driving up the price of farmland. Estate agents are marketing agricultural property as a tax efficient place to park money. Big money is buying up land, hoovering up farming subsidies and on top of that getting a massive tax break. This has a big impact for ordinary farmers who are struggling to buy farmland. Recent research from Guy Shrubsole has shown how deeply unequal land ownership is.

At the very least the government should cap the amount of relief that can be given out and a range of think tanks have suggested further reforms. Any reform should be part of a broader look at the subsidies and tax breaks that landowners get.

When it comes down to it politicians have to make choices about priorities. Choosing to give tax breaks to wealthy families, comes at the expense of longer wait times to see a GP or larger class sizes and less money to invest in the future of the country.

The UK’s wealth is spread deeply unevenly, with knock on effects on people’s life chances. Tax Justice UK’s vision is for a society where there is sufficient investment in public services to pay for the roads, schools and public services we all use, and deserve. We believe this vision is shared by the majority of people in the UK and that delivery of such a vision will require boldness and a new approach. It will mean taxing many of us more and taxing the wealthiest the most.

This new report puts into stark relief the unfairness at the root of the UK’s current system of inheritance tax reliefs and sets out steps the government could take to reform it.