Time for a Green New Deal

So, that's Christmas done....and a rest was taken.

Now it's time to think. That's the best bit about not working! Work really does get in the way of being constructive.

What was apparent to me almost as soon as I turned off the day job antennae is that now really is the time for the Green New Deal.

The origins and meaning fo the Green New Deal are discussed in this Vox article, but it recognises that the idea developed simultaneously in the UK and USA. I'd argue we have kept the flame burning brighter here. I would also make clear it was not my idea alone -I was one of the Green New Deal Group who created the idea here - my contribution being largely on tax and Green Infrastructure Quantitative Easing.

The real point is that now the idea has regained support in the USA it has begun to gain support, quite rapidly, as this research from Yale shows: 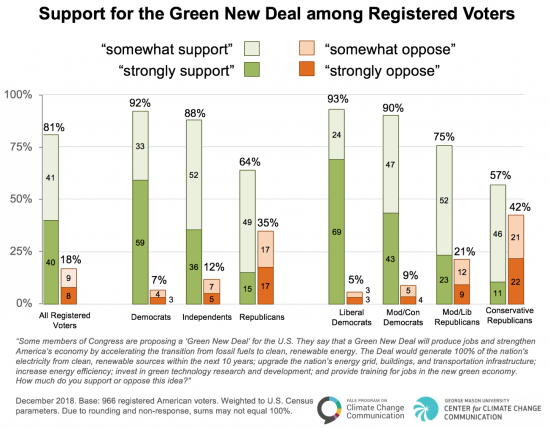 I stress, this is US data; the sample is not that big and all opinion polls are open to doubt. But the analysis looks to be exactly what would be expected across the political spectrum and that suggests that o0verall the answers may be reliable as well. That left-hand column is especially encouraging.

Labour has noticed. This is from The Guardian on Christmas Eve:

[I]n an interview with the Guardian, [Rebecca Long-Bailey] said the crisis was also an opportunity to bring well-paid, highly skilled jobs and economic regeneration to some of the most marginalised communities in the country.

“We have to tackle climate change in a really radical way, the evidence is crystal clear,” said Long-Bailey. “But this is also a wonderful opportunity to invest in those towns and cities that have felt neglected for a very long time … this has to be – and will be – a genuine transformation of the economy.”

Labour’s plan has echoes the Green New Deal being advocated by leftwing Democrats such as Alexandria Ocasio-Cortez and Bernie Sanders in the US.

This does not appear to be an accident. James Meadway, who is John McDonnell's economics adviser posted this tweet this morning:

@tonywestonuk @KimDriver11 @RichardJMurphy Oh something like a Green New Deal would be excellent. See what Becky says here: https://www.theguardian.com/politics/2018/dec/24/labour-government-tackle-climate-change

Candidly, the language used by Rebecca Long-Bailey is to close to the 'jobs in every constituency' line that Colin Hines and I have, in particular, been pushing for some time for the coincidence to be just chance. I welcome that.

This is, indeed, the time for the Green New Deal.