The UK is a relatively lightly taxed country – and it shows

The OECD has just published new data on trends in tax revenues in 2017. This is how the countries stand (click for a larger image and then click the resulting image again to get full size): 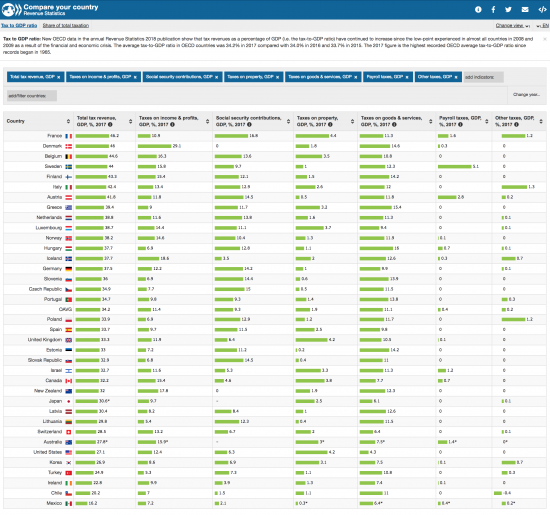 The UK is much less lightly taxed than, say, Germany, the Netherlands and France.

As the OECD notes:

Worryingly, the trend is seen most markedly in indirect taxes, which tend to be most regressive and so unfair:

Consumption Tax Trends 2018 highlights that value-added tax (VAT) revenues continue to be the largest source of consumption tax revenues in the OECD, and have now reached an all-time high of 6.8% of GDP, representing 20.2% of total tax revenue, on average in 2016.

After experiencing an upward trend since the economic crisis, standard VAT rates stabilised at 19.3% on average in 2014 and have remained at this level since. Ten countries now have a standard VAT rate above 22%, against only four in 2008

The questions are obvious. The first is whether our light taxation is worth it: we are getting dire services and poor social protection as a result.

The second is whether there is anything like tax justice as yet: the tax burden is heavy on those least able to pay.

Third, the question has to be asked as to why such large disparities between states exist. That is an issue I will be returning to.