I have been asked to comment on the new guidance Jersey has published for companies that are resident in the island and which may be impacted by its new economic substance test. That document notes that the reason for this test is as follows:

I have highlighted the phrase that is critical, in my opinion. The EU was not just asking Jersey to consider the economic substance requirements for entities doing business in Jersey; it was also asking them to consider the economic substance requirements of entities conducting trade through Jersey. In my opinion (and it is, of course, only an opinion)  any company incorporated in Jersey is conducting trade through the jurisdiction even if it is not economically resident there. What else can 'through' mean when 'in' clearly means 'resident'? 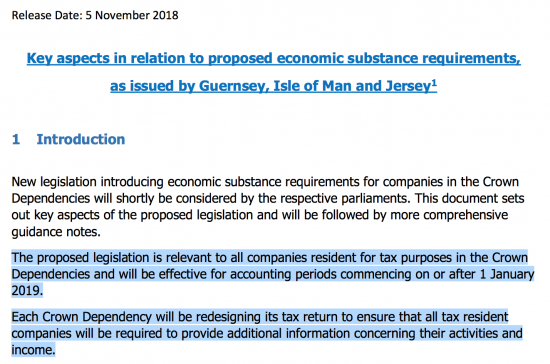 I have, again, highlighted the key text. Jersey is  only issuing guidance for companies that are resident  in Jersey,  and not for those that trade through it, and yet we know that only  13% of jersey incorporated companies are resident in the island, with the rest being resident 'elsewhere', with Jersey admitting they have no idea how that is determined or where 'elsewhere' might be.

The guidance does not come close to offer guidance on how residence is determined. Nor does it suggest what disclosure is required by non-resident companies. And it does not say what evidence will be expected to prove that non-resident companies are resident elsewhere - which is a key issue to the EU in tackling offshore tax abuse. After all, this is what its whole case against Apple is about.

In that case, my comment is quite straightforward: this guidance note as spectacularly misses the point of the EU's intention as the draft legislation does, and will not prevent Jersey (and Guernsey and the Isle of Man, if they follow suit) joining the EU tax haven blacklist.