The FT begins a new series on accountancy this morning, looking at the failings of this sector. The series comes as the Kingman Review collects evidence on the future of the regulation of the audit profession in the UK. It headlines with this:

An illusion of choice: the conflicts that mire the audit world

Most listed US and British groups use one of the Big Four, with issues discreetly hidden

The evidence comes from two charts. This is the concentration of Big 4 representation in the audit market of FTSE 100 companies: 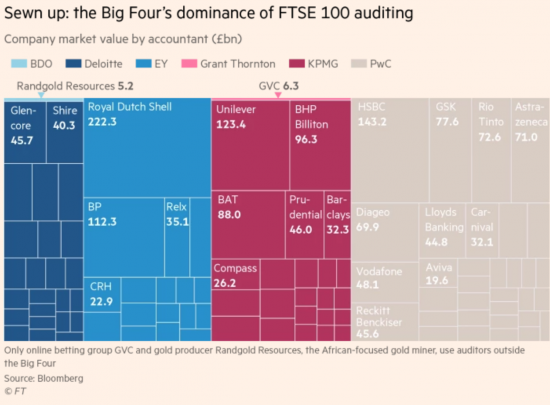 And this is the relative weighting of audit and consulting fees within those firms: 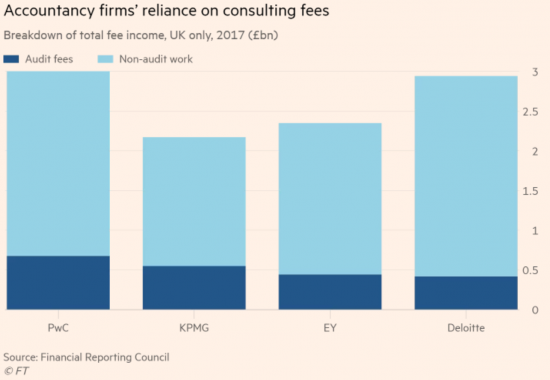 In other words, consulting is vastly more important to them than audit. Despite that they control the audit market. And the customers for their consulting services are the FTSE 100. In that case the opportunity for many companies to change auditor is very low because any firm other than the one they already have is ruled out by conflicts of interest.

The result is that there is no real audit market. And so no alternative opinion available to that already supplied. Which is precisely what matters in this sector.

The second it should be doing is being transparent in its workings.

And third, any conflicts in the evidence it receives should be transparent.

So that, fourth, its findings can be seen to be untainted by any influence.

I was then worried to hear, yesterday, that the evidence being submitted to the Kingman review, including my two submissions (one individual; the second joint) is not going to be published.

It's very hard to overstate just how inappropriate that plan is. It's essential that for once there be a little transparency in this sector. Kingman needs to provide it. Publishing the evidence is the first step towards that. It is essential that it happens. The review of the Big 4 cannot take place behind closed doors. And we have a right to know what they are saying to it. The alternative is the perpetuation of the farce of discreet hiding of the facts that the FT rightly highlight.