Last December I wrote a blog post suggesting that the government was aiding and abetting money laundering by letting UK based companies be incorporated direct by Companies House without any checks on the identities of those doing so when the private sector is required to undertake appropriate money laundering 'know-you-client' procedures. I highlighted a report from Transparency International on the issue when doing so.

One reader wrote to his MP as a result and got this reply: 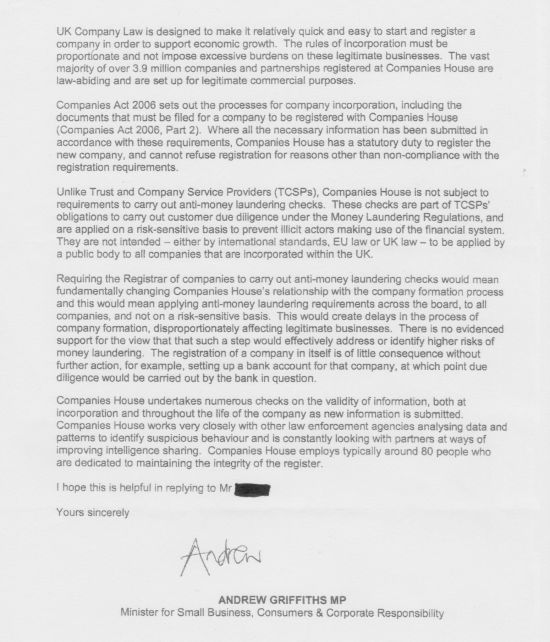 First, that the whole of the first page fails to address any question asked.

Second, that expediency is the basis for the answers in the first two paragraphs on the second page. There is no policy here. Rather there is a 'speed is good' and a 'no questions asked' attitude that means that money laundering risk is not even considered a risk that might prevent incorporation of a company.

Third, there is an apparent inability to spot that what the Registrar of Companies does when forming a company is identical to what a third party does and to have one rule for the private sector because the risk of abuse is recognised and another for Companies House simply because the risk of abuse is ignored is a red flag for risk existing - about which there appears to be a casual indifference hidden behind the glib suggestion that Companies House was not intended to be covered by regulation and so it is quite acceptable if it is not.

Fourth, the government seems quite unaware that their requirements do cause delays in the private sector, precisely because checks take time, but almost seem to take pride that Companies House circumvents this.

Overall there is evidence of an attitude that applauds regulatory laxness; fails to appreciate that abusers will always find and abuse the weakest link in any chain, and a total lack of awareness that this is weak link is what is being provided by Companies House.

In addition, there is no apparent awareness that because the UK is unusual in not requiring these checks the UK system is used to facilitate abuse elsewhere. Absurdly, many tax havens have better standards than we do, by some way.

Andrew Griffiths does not cover himself in glory with this reply. It is contemptuous of international standards; creates an unlevel playing field and does undoubtedly reflect a system where abuse is easy to perpetrate. I stand by my suggestion that the government is aiding and abetting money laundering by its laxness.

I would add that some simple changes in the law could correct this.

First, the right to refuse incorporation should exist where there are any doubts as to the intended legitimacy of the intended use of the company.

Second, there should be full anti-money laundering checks on incorporation.

Third, these should be required to be updated at least every three years (and maybe more often) unless another agent, such as an accountant, has confirmed they have alternatively checked the information.

That way we might just beat the abuse that is prevalent using UK companies. Right now we have not got a chance.