Am I right to defend Oxfam?

The following comment was posted on the blog overnight. It raises an issue in a fair way that needs addressing:

Are you not defending child abuse and other wrongdoing by attacking these journalists who are doing their job?

Oxfam have said that they didn’t describe the details of what happened to anyone because it would have “drawn extreme attention to it” which would “have been in no-one’s best interest”.

Which looks very much like a cover up to me. If this was some group you disagree with you’d be all over them attacking them like you are doing with the Times, but because you are on their side you are trying to attack the Times and defend Oxfam, claiming some conspiracy against them.

It could just be of course, that Oxfam aren’t as clean and wonderful as you would like to think. Haiti and Chad aren’t the only stories which are going to come out — this I know for certain.

I stress four things. First, that I have very clearly condemned the abuse that took place. It was utterly unacceptable. Second, I have made clear that the issue was reported at the time: it is impossible to say that there was the total cover up that has been claimed. Third, I have said I think Oxfam could clearly have done better with the Haitian authorities.  Fourth, that may also be true with the Charity Commission, although that is much less clear: it seems they did have opportunity to ask based on information supplied.

And in saying that I want to draw attention to the evidence that is now being used against Oxfam but which actually says it seems to be doing its best to deal with this situation. This comes from its 2016 /17 annual report (page 24): 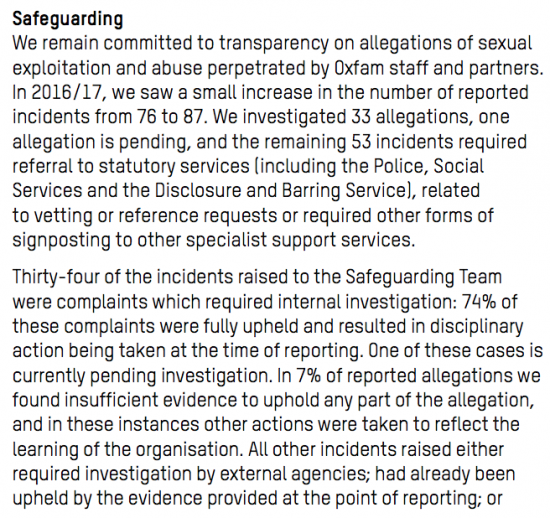 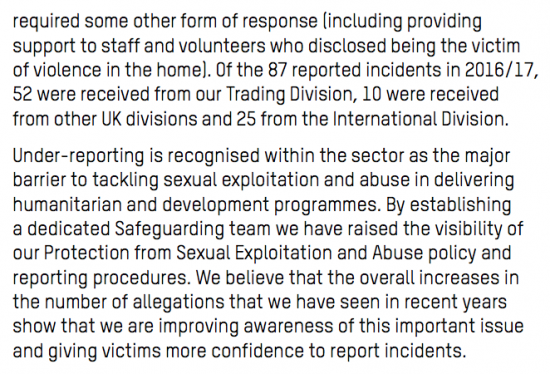 That does not read like an indifferent organisation to me. That reads like one that recognises there is risk in what it does and is doing its level best to tackle it.

That includes reporting a majority of cases to external authorities.

And it includes admitting that a large proportion of complaints were justified.

Notably, many of those took place in Oxfam shops. The majority of abuse was not in the supply of Oxfam's frontline services.

But where that happens referral is also being made.

All this is admitted. As is the need for more vigilance, despite which Oxfam admits that like all organisations it will miss cases because of under-reporting.

There is in a sense nothing here to be proud of. The ideal level of abuse is no abuse. But equally here is an organisation that seems to be trying to tackle something that is a reality. And what it is making clear is that it is not afraid to report to authorities. It is reporting its own failings.

To suggest that this means the organisation is supporting child abuse seems way wide of the mark to me. Instead this evidence suggests that much of the criticism made is taking one issue where things were not run well and blowing them out of proportion.

In saying that do I think I am supporting child abuse? I think the suggestion is absurd.

Do I think Oxfam is supporting child abuse? Again, I think the suggestion is absurd.

In that case do I think it fair to ask if the journalism in this case was objective? Yes, I do.

Do I think it appropriate to suggest that there were other motives for that journalism? Yes, again, I do.

Do I also think it right to suggest that the UK cannot do without its development NGOs, and the awkward questions that they pose? Emphatically I do.

And do I think that there is coincidence between this overall story and this picture from Friday?: 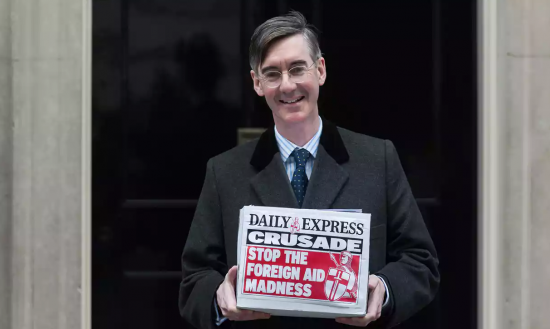 Of course, I may be wrong. I have stuck my neck out on this issue, believing that there is no systemic issue in Oxfam. If it proves otherwise my judgement will be incorrect. But I am going to be surprised  if such a systemic failing is found. And I am going to say that if it is the malaise in our society is much deeper than I have ever realised. And in that case I will admit I am wrong at a great many levels.

But based on my experience of working with many people from that agency I am not expecting to have to do so. Oxfam has its faults, but this is not, I think, one of them. And whatever those faults are, nothing justifies this attack on the vulnerable who Oxfam support or this blatant attack on an organisation whose doubtless main fault in the eyes of its accusers is to ask whether the very richest should be as rich as they are.

Right now I am willing to say Oxfam got things wrong. It's admitted that. But to suggest that defending the charity is to defend child abuse is absurd. That is not what Oxfam does.