The Times’ campaign against Oxfam is really about defending inequality

Rod Liddle, writing in the Sunday Times this morning, makes clear what that papers supposed expose of a story that Oxfam press released in 2011 is all about. The email headline is:

And the article (behind a paywall, so I reproduce this part in the public interest) says: 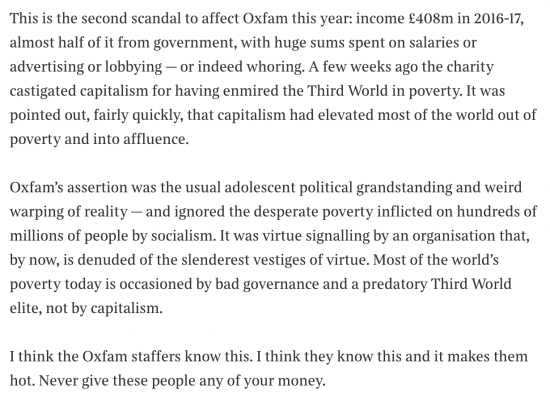 What The Times is really angry about is the fact that the world, rightly, believed Oxfam when they said that capitalism distributes the rewards of market activity inequitably and that the world's wealthiest people did not actually earn their fortunes but extracted them from others. And so, in an attempt to discredit this message The Times is dedicated to raking Oxfam's muck. And it found some.

Of course it did. No organisation the size of Oxfam has no muck. Real, fallible, people work for it. They do not advertise for saints because there are none. The C of E and RC churches have proved that. But so does casting around humanity itself do so. In a world of flawed people the question is how organisations deal with the crises those flawed people create.

So the only relevant questions here are a) is The Times justified to argue that capitalism is a global panacea to inequality (to which the World Bank, IMF and OECD, all of them hotbeds of socialism, suggest the answer is 'no') and b) did Oxfam appropriately deal with this problem when it found it? The answer here is not an unambiguous 'yes'.

It could have, perhaps, cooperated more fully with the Haitian authorities. But as far as I can see Oxfam say they found no convincing evidence of illegality. If that is true what were they meant to report? I can see no way an employer can report an employee for action that clearly breaches its internal safeguarding procedures that does not breach the law. Maybe others can: if so I am wrong, but that would look like time wasting to me.

And they could have been clearer with DfID and the Charity Commission, maybe. But did they do a cover up? Hardly: they did report it. Which means they did have systems in place. And they did work. Maybe not perfectly, but as it is the outcome here is much better than I suspect would happen in many organisations faced with similar wholly unacceptable conduct

So, we come back to the point that Liddle reveals: this is really about The Times' fury at Oxfam for making clear that capitalism as it functions at present does not help the world's poorest people because inequality is deeply harmful to them. And the fact is that The Times are calling this one badly wrong as a result. They're so frightened that Oxfam is right they are resorting to desperate measures to discredit the charity. The cost will be to the victims of the next world disaster that requires humanitarian intervention.