This government’s in freefall without a parachute

There always has to be a moment when history says things changed. What ‘things’ might be differs from case to case but the fact is that change is guaranteed during any significant process. Sometimes it is so gradual it is hardly noticed, but if that’s the case history does not take note. When history pays attention it’s precisely because the change was so significant that there had to be a pivotal moment where a trajectory changed. The EU referendum was one such moment. It may be that we'e living through another right now.

The Politics Home email has these headlines this morning: 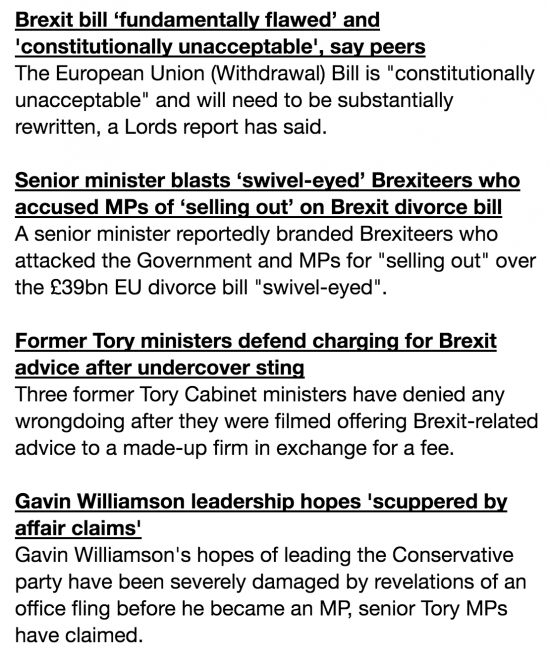 That's the vast majority of the political news relating the Brexit and the fall out of the confusion it is creating, most especially for the Conservatives.

The sense that the government has no idea what it is doing is overwhelming now.

It seems absolutely obvious that it is riven from top to bottom.

And through it all is a collapse in Tory discipline, and conduct, as marked as that which tainted the entire Major administration of the 1990s.

The difference is that Major, quite remarkably, had the charisma to survive (which does not say much for the requirement for political charisma in modern day political leadership). There can be little doubt that Theresa May does not share that good fortune: it is all too apparent that many would happily see her go, barring the concern many have about who might replace her when a great many Tory MPs cannot imagine themselves serving either Johnson or Rees-Mogg.

What we have then is the moment when the government has begun freefall without a parachute. That always ends painfully. I think this will.