Might I recommend today's column from my old friend and fellow Green New Deal member Larry Elliott in today's Guardian? 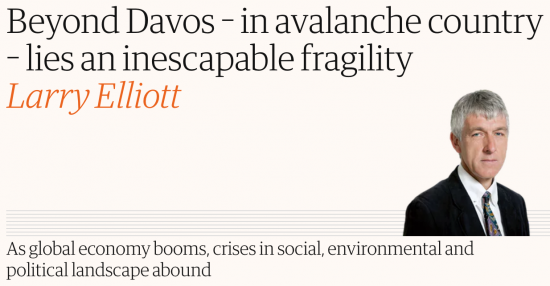 A synchronised upturn in the global economy has dispelled the pessimism that has been around ever since the financial crisis of a decade ago. Booming stock markets mean the billionaires who will spend the next few days emoting about inequality are considerably richer than they were a year ago.

Last January, the fear was that the world would never shake off the 2008 banking meltdown blues. Now there is talk of a return to the Great Moderation, the period in the late 1990s and early 2000s when growth was robust and inflation was low.

Larry is right; this is the new mood. The FT is positively drooling over it. 'Normalisation', otherwise known as the abusive form of bank led capitalism that was unconstrained pre 2008, is the aim of the wealthy elite now. But as Larry notes:

Yet, the Great Moderation was always shakier than it looked at first glance, built as it was on foundations of debt, speculation, rising asset prices and a world divided between countries running trade surpluses and those deficits. As the WEF noted in its Global Risks report last week: “The global economy faces a mix of long-standing vulnerabilities and newer threats that have emerged or evolved in the years since the crisis.” Talk of a new Great Moderation looks premature. The Great Fragility would be closer to the truth.

So that’s the Davos reality this year: economic fragility, environmental fragility, social fragility and political fragility. And it’s worth remembering that when there’s a threat of an avalanche, one rifle shot or even an untimely bellow can bring the whole mountain down.

Why? Because Donald Trump comes to Davos on Friday.

He may be the tipping point. I am not sure though: at most he is emblematic of the deeper malaise I have already noted this morning. But whatever might push neoliberalism off its perch its fall is inevitable. The only question is on what the consequences might be be.