The FT would seem to have an important message in its pages for the UK Chancellor this morning. As they note:

The UK bond market has an attractive message for the current chancellor: you can loosen the purse strings. Yet when Philip Hammond stands up at the House of Commons despatch box next week, he is likely to reiterate his reluctance to increase public spending, despite conditions in the gilt markets suggesting there is scope to do so.

The market is “much more relaxed than Treasury may think about the outlook for the public finances”, says David Owen, chief European economist at Jefferies. “The public finances have improved and importantly, the UK has voted to leave the EU and there is more focus on the need for a targeted fiscal response to give growth more of a chance.”

There is plenty of other comment to support the opinion, backed by evidence of strong demand for bonds. Again, as they note:

Although real yields remain negative – two-year paper is trading at around 0.48 per cent, a discount to the 0.5 per cent base rate of borrowing set by the BoE – investor demand for gilts remains strong. Last week’s long-dated index-linked syndication saw record demand.

And this is despite the plethora of negative yielding debt in the world right now. As another FT article notes this morning the scale of this debt is significant: 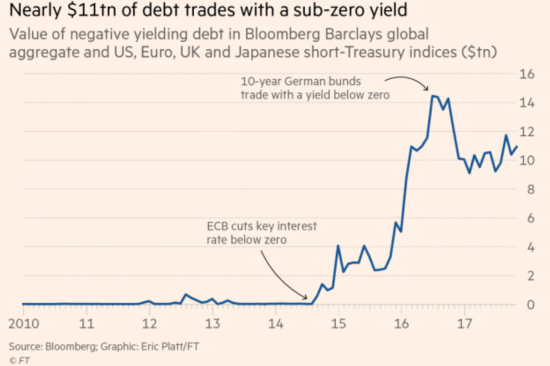 What does this mean? Three things. First, government debt is not squeezing out the private sector, which is the old so-called free marketeers' paranoia. If $11trn of money is willing to receive a negative return that is because there is nothing else for it to do. Capitalism has not a got a use for it. That's why it's been lent to the state as borrower of last resort.

So, thirdly, the state has a duty to use this money constructively. And that does actually mean more spending.

And yes, I know that the private sector want this to push up yields. Well, they may rise anyway: Brexit and the Bank of England's simultaneous desire to create a household debt crisis may deliver that. I don't happen to think a bit of extra borrowing will. And why not? Because those depositing money in gilts know that the spectre of QE is always present now. And they're mighty grateful for it. It's QE that guarantees the value of this debt and reduces it's yield to next to nothing. And the threat of QE means that gilts can now be used to finance the Green New Deal that we need. If only.