If PWC think the use of tax havens is becoming unacceptable why do they operate in so many?

I was intrigued by a report in Business Insider this week  that said:

"Big Four" accountancy firm PricewaterhouseCoopers (PwC) has predicted the use of tax havens by companies and individuals to avoid paying tax will soon become "unacceptable."

In an Asset & Wealth Management report released on Monday, PwC said the public was increasingly hostile towards those perceived to be not paying their "fair share" of tax, and that businesses would need to put more effort into tax transparency in future.

"In an era of mistrust of financial services, especially among the millennial generation, tax will become important for the brand," the report said.

"Being viewed as not paying a fair share of tax or using questionable tax havens will be unacceptable."

That's all well and good, but as I reported earlier this year in work undertaken with Sail Stausholm of Copenhagen Business School, PWC are in a considerable number of locations in the world, as this table shows:

The consequence is that PWC operate in a majority of the 53 secrecy jurisdictions that we identified in the report, as this table shows: 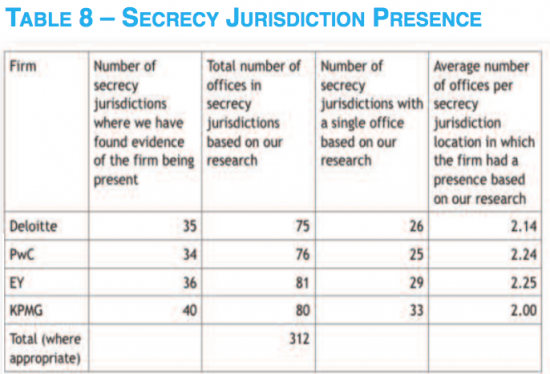 If working in tax havens is so unacceptable now the obvious question for PWC is why are you so big in them in that case? And when are you leaving?

I will be happy to publish any response.