A year ago Facebook said it would shift its billing for its UK operations  to this country from Ireland so that we could see what tax was really due in this country. The result is this UK profit and loss account for Facebook in the UK for 2016, which it has just published at the very last moment that was legally possible under UK company law: 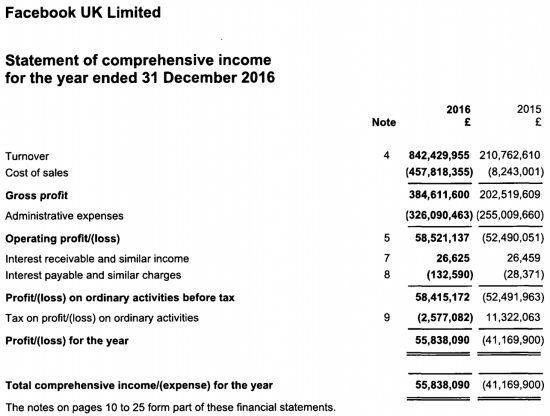 As I always tell my students, no data makes sense unless it's compared with other relevant and reliable available information. It so happens that Facebook provides me with that alternative data. It's in their 2016 worldwide accounts, published much earlier this year in the US,  which data does, of course, include the UK result. This is their global income statement for 2016: 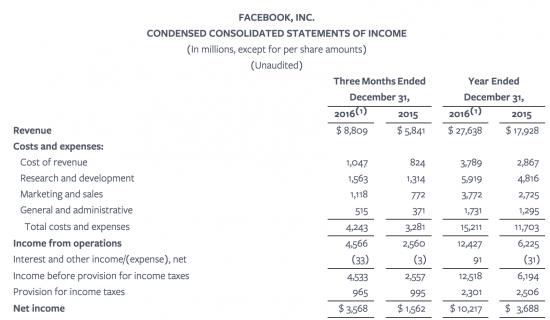 What I then ask my students to do when offering data driven essays is 'some analysis'. I don't actually specify what because I am well aware that at City we are open minded on the mathematical aptitude we require of students. In this case the data processing required to sense that something feels seriously amiss is limited,

In the UK in contrast the pre-tax profit rate is 6.9% and the tax provision rate a somewhat low, and unexplained by the tax notes, 4.4%.

It's really not hard as a result to form the impression from this new data that Facebook is declaring vastly lower profit rates in the UK than it is, overall, worldwide. And candidly, when the worldwide profit margin is 45.3% it is very difficult to think of any commercial logic that might justify that profit differential. I know that it will be claimed to be due to the intellectual property having been developed in the USA. But let's be candid; IP is worthless without a customer and it is UK customers who create the value added in this country, and not the IP as such.

In that case I am of the opinion that in such an extraordinarily high margin business the only real basis for allocating profit to a country is on the basis of revenues earned there, which are what create the value in the IP. And in that case if profits were allocated to the UK at the worlwide profit margin then Facebook would be declaring £380 million of profit here. If they paid tax of about 20% on that, as we'd expect, that would be £76 million in 2016. The reality is that instead they eventually expect to end up paying just £2.6 million on their 2016 UK results.

That does not make sense. It feels like Facebook are still making a mockery of the UK tax system and their UK users by not paying their fare share of tax in this country, whilst their accounts, which they said would help us understand what they do in the UK, do nothing of the sort. In fact, they're massively opaque and give us little clue as to why profits are so low. Indeed, you could call the accounts pretty unforthcoming with some justification. Nor do they try to explain the low tax charge in any meaningful way, whilst the accounts are published as late as they could possibly file them as if to show how embarrassed they are about what they're doing. Overall they can fairly be described as a tax PR disaster.

Facebook has a long way to go before it can be said to have appropriately explained its UK tax payments. And that failure is perhaps the most baffling thing about all this because it really does not look like, based on its worldwide tax rate, that doing that would be hard to do.