It is ten years ago today that Northern Rock failed. I will be speaking at a Tax Justice Network organised event at the Royal Society of Arts this evening to mark the occasion.

I have particular association with what happened at the time. I reproduce below what was the first of many blogs that I wrote on the subject. This one was just three days later, making me one of the first people, if not the first person, to ask the questions which eventually were seen as core to this issue on matters such as securitisation, a shadow bank, the use of orphan entities, the abuse of offshore and structuring via special purpose vehicles. Back then most people had never heard of many of these things. Little did they know the price they were to pay for their existence.

Northern Rock is in trouble because it has financed its mortgage book by borrowing commercial money rather than taking deposits from customers. To do that it has issued ‘commercial paper’. And now no one wants it.

I’ve looked at that ‘paper’. I’m not surprised no one wants it. Most of this ‘paper’ is issued through a long series of special purpose vehicles which re named in its accounts. To get some idea look at this list: 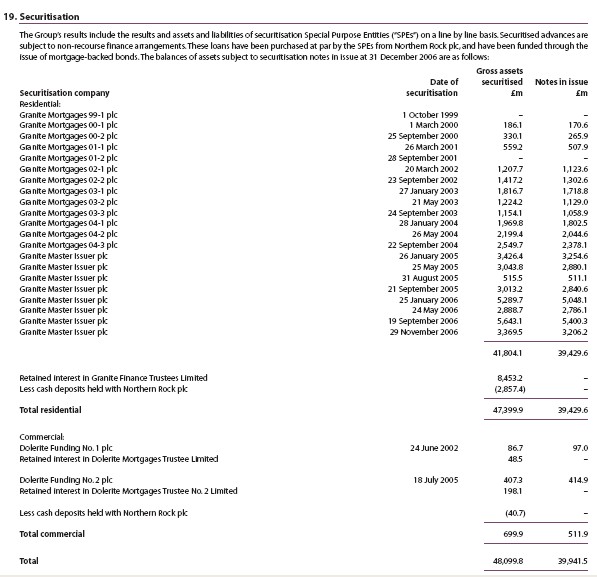 That’s near enough £40 billion of notes in issue. 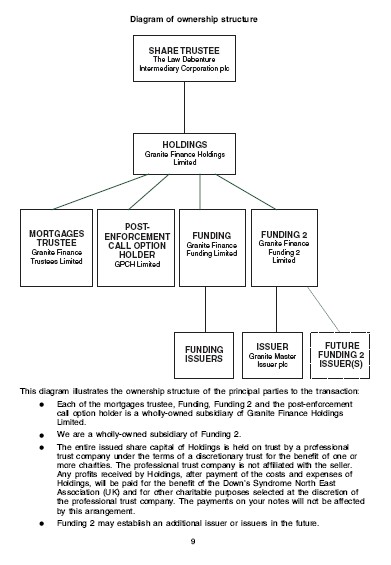 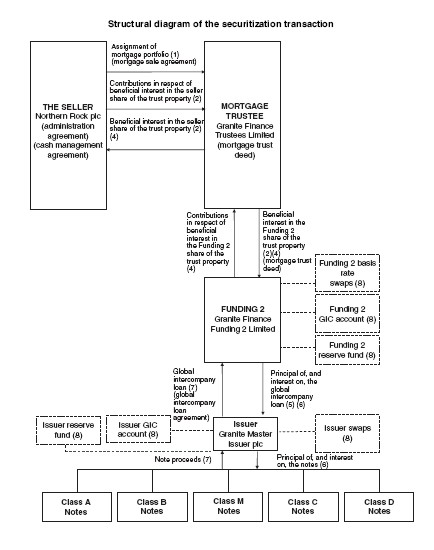 1) Note who the share trustee who owns Granite is — it’s a Law Debenture Company. This group exists to provide services to special purpose vehicles. No surprise it has offices in London, New York, Delaware, Hong Kong, the Channel Islands and the Cayman Islands.

2) Granite is actually owned by a Law Debenture subsidiary, not by Northern Rock. I’ve checked.

3) However it does so as trustee — the beneficial ownership is supposedly explained here (it’s in the first diagram above as well):

Any profits received by Holdings, after payment of the costs and expenses of Holdings, will be paid for the benefit of the Down’s Syndrome North East Association (UK) and for other charitable purposes selected at the discretion of the professional trust company. The payments on your notes will not be affected by this arrangement.

c) The construction of an arrival device to ensure that as few people as possible, almost certainly the Northern Rock directors included, know just how this deal works. I guarantee you it’s a tiny number that do.

And it’s this wholly artificial construction, seeking to shift liability and to avoid responsibility and abusing common sense decency with regard to the abuse of charity to achieve commercial aims that is pulling Northern Rock down.

Of course it’s not alone. This type of deal is constructed every day off shore. It’s the bread and butter of international finance.

It’s why we can’t trust markets. It’s why regulation is needed. It’s why ownership has to be revealed. It’s why declaring where you’re working is so important. It’s why accountants have once more to put substance over form.

Now I know that for a change these Northern Rock entities were on balance sheet but most aren’t. And can you see as a result why no one will lend inter-bank now? They’ve all been so busy creating these sorts of artifice that no one dare do so — because they all know the warts in their own system, so presume there must be as many in everyone else’s.