The new report on economic justice from IPPR needs an ‘ism’ to describe it. Would ‘Careism’ do?

IPPR's  Commission on Economic Justice has issued its interim report this morning. It's attracting some welcome publicity, largely because the Archbishop of Canterbury, who sits on the Commission, has been willing to write in support of it.

There are a number of reasons to welcome the report. First that's because it includes some useful new data, especially on inequality, which is a major theme of the work. As this table shows, incomes have not yet got anywhere near recovering their pre-2008 crisis trend: 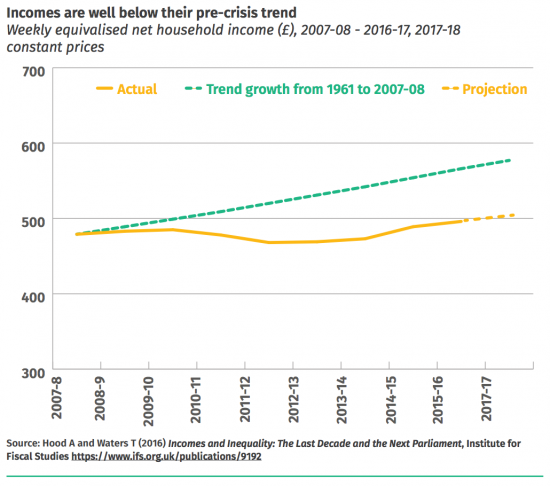 And as this table shows, this is not quite unique to the UK, but we're an exception for being in this situation: 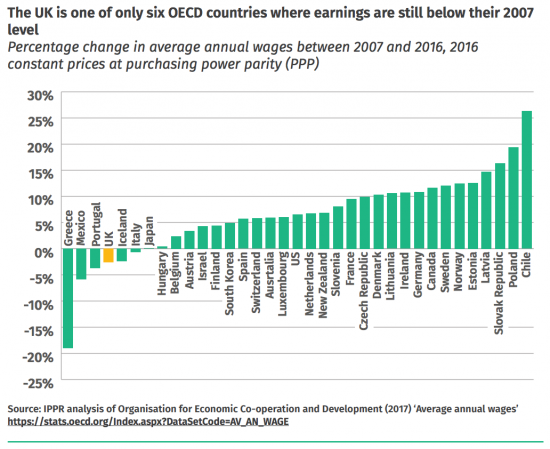 Second, this is because the report is saying something that the left (and I am putting IPPR in that category) needs to reiterate often, which is that the broken economy we have was created by choice. There is nothing inevitable about neoliberalism, austerity or policy that has created a divided country. That may be a familiar theme on this blog but far too many in the country still think Thatcher's TINA - There Is No Alternative - is true. Ministers and their loyal media supporters pump that out as if austerity is an inevitable fact of life when it is not.

Third, the report suggests that seventy years after the post-war transformation of the economy and thirty five years after Thatcher changed it again this is the tme for the next major change to the economy. I do, of course agree, but this is where the report runs into trouble which it will have to address before the final version is out next year, complete with recommendations.

As it is the report is clear that we need greater economic justice; a better sharing of rewards; measures to tackle the gross economic inequality in the UK; a fairer and more progressive tax system; a new industrial strategy; better institutional cooperation, and more besides, but what it also makes clear is that this transformation has to take place without a guiding philosophy to direct it. 1945 had Keynes. 1980 had Hayek and Friedman. 2017 has no equivalent: no description and no recognisable ethos apart from social justice around which to cohere.

The question I have is whether that matters? Or, is it a strength and not a weakness? Can change only happen if there is an 'ism' attached? Or can a principle guide a process that will have, by definition, to be broad based when experience has shown that dogma divides, come what may? In the absence of an alternative it may have to, but what I suggest in that case is that this be positively embraced. This requires care, but it's possible.

I think it is possible to want a strong state and believe that the private sector, if properly regulated, has an enormously important role to play in the economy.

I do believe that there is little merit in polarity for the sake of it: indeed, one of my great frustrations with some commentators on this blog and in social media more generally is their apparent conviction that the world is black and white when every experience I have of it suggests that this is only rarely the case. Most of the time compromise is essential to make life work. Usually there are multiple solutions to problems that might work and we cannot know which will be best in advance. And closed mindedness as often ignores another person's humanity; certainly as often, if not more often, than it is a defence mechanism against the risk of abuse.

The whole IPPR report is premised, even if it does not explicitly say so, on the idea that abuse  has taken place, and I do not dispute that. Of course it will take robustness to address that. But I seriously doubt the alternative requires a robustness that means nothing we recognise will be left behind. What is required is transformation. In the absence of an 'ism' this needs to be guided by simply expressed themes. And from my brief reading this is where I think the report does not work. It does not say in sufficiently direct terms what those themes are. It describes the basis for process. It suggests reforms, like necessary attention to the tax system, well. But it has to be clear that if it is to succeed in narrative building why these pragmatic exercises that recreate and reform many ideas that have worked but which require re-nuancing now become something greater than a set of admin reforms.

Justice, fairness, equality, sustainability and the right to a life free from the oppression of excessive debt and rents should motivate ths work.

So too should a focus on the meeting of the need we all have for supportive communities that encourage people to flourish.

But what hangs all this together? It has to be the principle that we care for one another that is so alien to neoliberalism.

So I get to an 'ism' after all. This report is about caring, in all its meanings. Maybe Careism is what it's about.  And maybe that is the 'ism' that we need to challenge neoliberal philosophy that has so obviously been built on the idea that no-one should  care a damn about anyone else.