Bailiwick Express in Jersey has an article today on the use of a States of Jersey credit card by Senator Philip Ozouf, the former finance minister. As they say:

Further details about Senator Philip Ozouf’s credit card use while he was a Minister and whether he will face disciplinary action cannot be released because they are being reviewed by 'a public authority.'

Over a period of at least three years, Senator Ozouf was found to have repeatedly used the card to pay for ‘personal’ expenses such as media subscriptions, Uber taxis, flights and travel for guests, books, computer equipment and clothing – with the bill going straight to the taxpayer.

That expenditure continued until Senator Ozouf’s Accounting Officer – the civil servant responsible for his budget – changed in September 2016 to the States Chief Executive John Richardson, who asked him to pay it back in January. That sum remained unpaid until four months later when Senator Ozouf was issued with an invoice. He then promptly repaid.

Of most personal amusement to me is the selection of books paid for with the credit card. They apparently include: 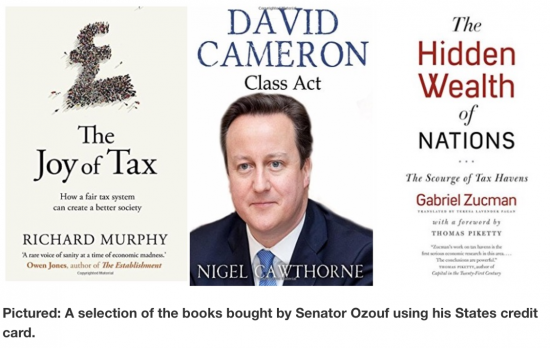 Two out of three good choices. But the middle one? Come on Philip....

Someone had a sense of humour when reporting this.