The personal debt crisis was manufactured by Conservative governments, and Mark Carney’s failure to respond

I noted the Bank of England's suddenly discovered concern about personal debt in the UK yesterday, and the threats that they are issuing to banks who have extended such loans. As I noted, I have been warning on this issue for some time. I have done so based on data available to the Bank of England at any time over the last few years. This data is that published by the Office for Budget Responsibility at the time of every budget and autumn statement over the last few years, of which there have been quite a lot.

Take this forecast from the December 2013 OBR report, which usefully summarised a series of projections in the growth of household debt to household gross income: 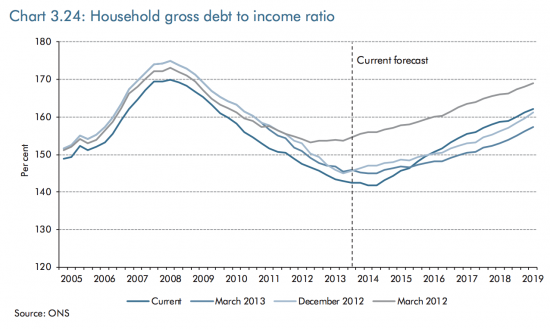 It was clearly anticipated at that time  that household debt would grow steadily. 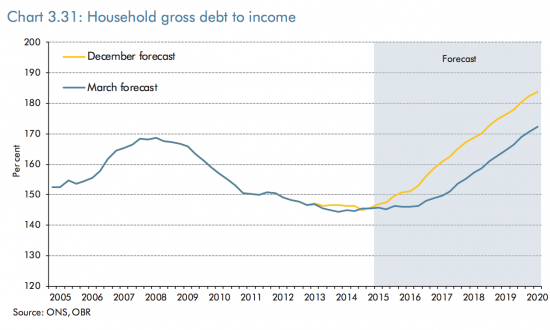 The projections were markedly higher. Record rates of borrowing wee forecast. In fairness, Carney sounded some alarm signals, but not enough. Admittedly by March 2017 the forecasts were down again: 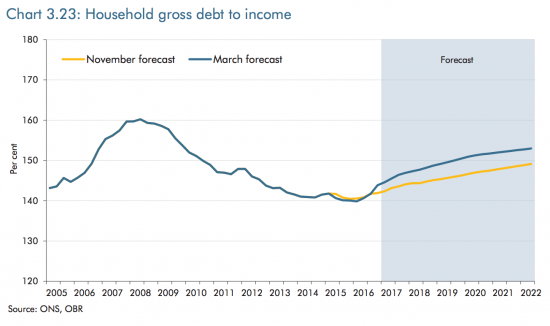 Note the 2017 forecast is remarkably similar in all cases. And in every case the forecast is for a rise thereafter. So why is Carney surprised? This has been on the cards for a long time. And it is not by chance. The simple fact is that if the government tries to borrow less (and that remains its objective) then someone else has to save less or borrow more than at present. And since, given Brexit, it is not obvious that will be the overseas sector, consumers are the most likely to increase their borrowing.

And I stress, this is not by chance. It is a necessary consequence of less government borrowing. That is because of what are  called the sectoral balances, which I explained some time ago, here. In essence, in macro economics it is assumed that all transactions in sterling take place between four sectors. These are the household sector, business, government and the rest of the world. For once this is a good assumption: those do describe all the available options. And what national accounting, again entirely reasonably, assumes is that when considering transactions in sterling the economy (when the foreign sector is added into the equation) the transactions between these sectors must balance. Again, this is true: it's only a restatement of the accounting truth that for every debit there must be a credit.

So, in that case if the overseas, household and business sectors all saved the government has to borrow. As borrower of last resort it has to. This is shown by this chart, this version being from March 2017: 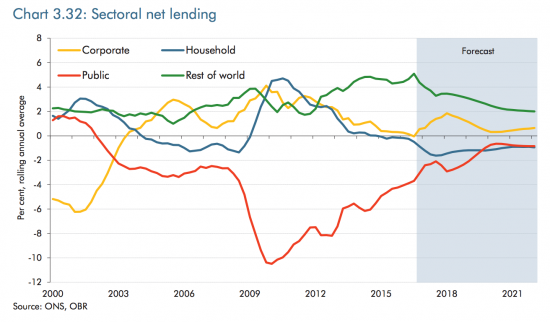 Government borrowing since 2009 has existed almost entirely because almost every other sector has chosen to save. But we now know consumer patterns are changing. Savings ratio are reaching all time lows and borrowing is rising, rapidly. It's the corollary of the government's desire to offload its obligation to borrow onto an economy unfit for any other sector to take over the task without major risk arising.

I repeat, Carney should have seen this coming. The government's plans to increase consumer debt and so put us in this position have existed for years. So three questions. Why didn't he say that this policy was wrong much earlier? And why didn't he put steps in place to prevent it earlier? And why didn't he say government retained the duty to borrow, which is a virtually risk free activity? Because he did none of those things the fault for this is Carney's. And George Osborne and Philip Hammond's, of course. None can duck responsibility for the crisis we're facing. They made it.